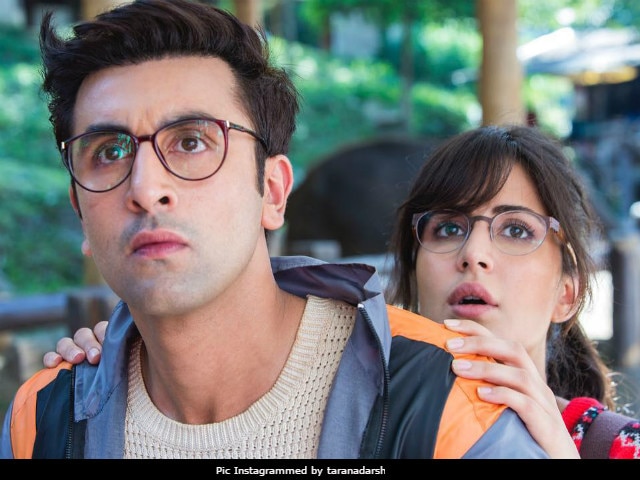 New Delhi: Ranbir Kapoor and Katrina Kaif's Jagga Jasoos is 'dwindling' at the box office. The film has completed six days in the theatres and made over Rs 43 crores, reported trade analyst Taran Adarsh. "Jagga Jasoos continues to dwindle," writes Mr Adarsh along with single day break-ups of the movie's box office collections. Jagga Jasoos made just a shade under Rs 25 crores in terms of ticket sales over the weekend. But the film's box office figures witnessed a noticeable dip Monday onwards - respective collection figures for Monday, Tuesday and Wednesday are Rs 4.05 crores, Rs 3.48 crores and Rs 3.05 crores. The collective sum for the three weekdays is also actually less that what Jagga Jasoos made on each of the weekend days alone.

Sunday saw Jagga Jasoos score the highest with Rs 13.07 crores while it was Rs 11.53 crores on Saturday. On its opening day, Jagga Jasoos recorded a collection of Rs 8.57 crores.

Meanwhile, Jagga Jasoos has been reviewed by several Bollywood celebs and Amitabh Bachchan is one of them. "Just saw Jagga Jasoos. Could not resist telling Anurag what a delightful, innovative, well executed film it was; a joy to watch," he tweeted a day after the film released.

Jagga Jasoos is Ranbir and Katrina's third film together - the rumoured exes first co-starred in 2009's Ajab Prem Ki Ghazab Kahani and then in Rajneeti the following year. After their reported break-up in 2016, it was speculated that the duo would not promote the movie together but director Anurag Basu assured otherwise. Months later, fans were delighted to see Katrina and Ranbir take up promotional duties together.