Rishi Kumar Shukla, the new CBI chief, will head the CBI for a period of two years.The 58-year-old officer from Gwalior is at present the chairman of the Madhya Pradesh Police Housing Corporation.

Rishi Kumar Shukla, new CBI chief will head it for a period of two years, the centre said.

Former Madhya Pradesh Director General of Police Rishi Kumar Shukla, a 1983-batch officer, has been appointed the Director of the Central Bureau of Investigation, said a government notification. His name was chosen from a shortlist of over 30 contenders for the top post by a committee led by Prime Minister Narendra Modi.

Mr Shukla will head the CBI for a period of two years, the notification added.

The 58-year-old officer from Gwalior is at present the chairman of the Madhya Pradesh Police Housing Corporation. Although Mr Shukla has never been part of the CBI, he had served in the Intelligence Bureau where he handled several sensitive cases. He is said to be close to National Security Advisor Ajit Doval.

His appointment was made a day after the second meeting of a high-powered committee comprising PM Modi, Chief Justice Ranjan Gogoi and opposition leader Mallikarjun Kharge.

But it took several calls and a lot of convincing from the Prime Minister along with the Chief Justice for protesting Congress leader Mallikarjun Kharge to agree to RK Shukla's name, sources said.

"Seniority cannot be only criterion in appointment to such a critical post and experience in anti-corruption cases and prior experience of having served in the organisation should also be considered," the note said.

His objection was, however, rejected because they felt he was the senior-most officer with highest grading, sources added.

Sources also told NDTV that last year, RK Shukla's name was also shortlisted for the post of the Director of the Intelligence Bureau (DIB). But 1980-batch IPS officer Rajiv Jain, the present DIB, got an extention till June 2019.

Mr Shukla had played a key role in the extradition of underworld don Abu Salem -- who was found guilty in the 1993 Mumbai serial blasts which killed over 250 people -- and his then-girlfriend Monica Bedi in 2005, the source said.

The post of the CBI chief had been vacant since the unceremonious exit of Alok Verma, who had been engaged in a bitter fight with his deputy and Gujarat-cadre IPS officer Rakesh Asthana over corruption allegations. 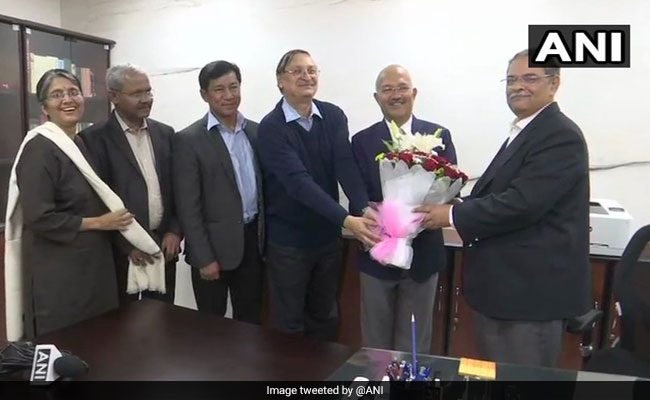 Rishi Kumar Shukla is at present the chairman of the Madhya Pradesh Police Housing Corporation.

The tension between the two officers peaked after Mr Verma's team filed a police case against Mr Asthana, accusing him of accepting bribes from a businessman being investigated by the agency in a money laundering case. Both were sent on forced leave in October following the centre's intervention.

Alok Verma was replaced by M Nageswara Rao, but a non-profit challenged his appointment as the acting CBI chief.

On January 10, Alok Verma was removed as boss of the high-profile investigating agency by a panel led by PM Modi, just two days after the Supreme Court had reinstated him in the post. He was transferred to the Fire Services as Director General, after the panel said that as CBI chief, he had "not acted with the integrity expected of him". Congress's Mallikarjun Kharge, representing the opposition, put up a dissenting note saying that the vigilance inquiry had not found evidence that Mr Verma was guilty of bribery.

The sacked officer refused to take charge as chief of fire services and quit. However, the Home Ministry has decided to conduct disciplinary proceedings against him for failing to take up the new job.

On Friday, the Supreme Court had pulled up the centre for the delay in appointing the CBI chief and said it was "averse" to the arrangement of an interim CBI director. However, three top court judges recused themselves from the case for various reasons.

The post of CBI director is "sensitive" and "important", and it is not good to keep an interim director of the agency for longer period, the top court had observed.