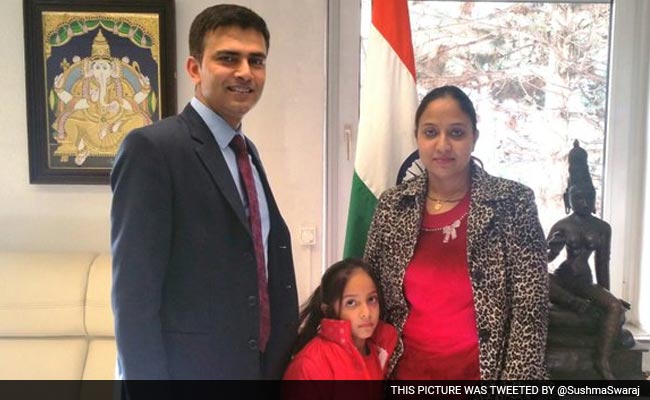 External Affairs Minister Sushma Swaraj had tweeted this photo of Gurpreet and her 8-year-old daughter yesterday.

New Delhi: Gurpreet, the Indian woman who was rescued from a refugee camp in Germany along with her eight-year-old daughter, reached New Delhi today, the external affairs ministry said.

Ministry spokesman Vikas Swarup said at a media briefing that she returned on an emergency certificate as she had not gone abroad by following the normal procedure.

"Our embassies and consulates issue these certificates to Indian citizens to return to to their country," he said.

Gurpreet's rescue became possible after swift action was taken by the external affairs ministry after she posted a video on the internet on Tuesday in which she claimed that she was hoodwinked into going to Germany by her husband's family where she and her daughter were kept in a refugee camp.

Following this, Sushma Swaraj said on Tuesday that the authorities were in touch with the father of Gurpreet, who hails from Faridabad in Haryana, and that the external affairs ministry has got the full report from the Indian embassy in Germany.

"We have brought Gurpreet and her eight-year-old daughter from the refugee camp to our consulate in Frankfurt," Sushma Swaraaj tweeted on Wednesday.

Navratri Durga Ashtami 2021: Know All About The 8th Day Of Navratri