During the talks, the two countries also affirmed their shared interests in the territorial integrity and unity. 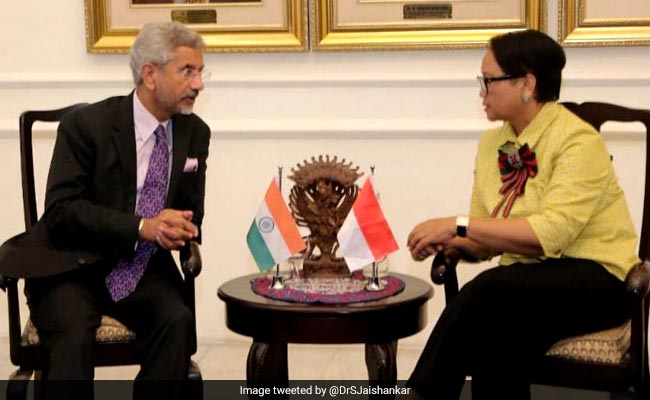 S Jaishankar is on a September 4-6 visit to Indonesia, his first to a South East Asian country.

India and Indonesia on Thursday "unequivocally" condemned terrorism and the "selective approaches" in dealing with the global menace as External Affairs Minister S Jaishankar held talks with his Indonesian counterpart Retno Marsudi in Jakarta.

S Jaishankar is on a September 4-6 visit to Indonesia, his first to a South East Asian country.

During the talks, the two countries also affirmed their shared interests in the territorial integrity and unity.

"As democracies, who both confront the menace of terrorism, in our meeting today, we unequivocally reiterated our strongest condemnation of terrorism in all forms and manifestations," Mr Jaishankar said in a press statement.

"We expressed our strongest opposition to any selective approaches in dealing with this global menace," he said.

India, during the meeting, called upon all countries "to stop providing state sponsorship to terrorism and to prevent their territories from being used for establishing terrorist safe havens."

"We also affirmed our shared interests in the territorial integrity and unity of the two countries," he added.

The two leaders discussed the entire gamut of bilateral ties and held talks on a number of regional, global, economic, political and security issues.

Acknowledging that the two countries are close maritime neighbours, Mr Jaishankar said that India values Indonesia as a key partner under our Act East and Indo-Pacific policy.

"Improving connectivity between India and Indonesia, especially between Andaman and Nicobar Islands and Aceh Province of Indonesia is, therefore, a key strategic priority for both countries," he said in the statement.

India and Indonesia last year agreed to set up a special task force to enhance connectivity between the strategic Andaman and Nicobar Islands and provinces in Sumatra Island to promote trade, tourism and people-to-people contacts. Aceh province is located on the northern end of Sumatra.

"We expect the Task Force to meet in November, if not earlier," he said.

"We are happy to have joined the Indonesia, Malaysia, Thailand-Growth Triangle (IMT-GT) as the first Dialogue Partner and Minister, I really appreciate Indonesia''s invitation in this regard. We hope to have further integration of economies of sub regions of Eastern India with IMT-GT," he said.

The two countries also agreed to work together for a balanced and sustainable trade by providing greater market access, both in goods and services to achieve the trade target of USD 50 billion.

The two sides also agreed to build a strong economic and development partnership that strengthens the flow of capital, trade, people and ideas between India and Indonesia.

"As two democratic countries with common values of pluralism and civilisational harmony, it is important that we stand together in facing global challenges," he said.

"I look forward to Indonesia joining us on the launch of the Coalition of Disaster Resilient Infrastructure initiative later this year at the United Nations," Mr Jaishankar added.

Highlighting the historical linkages between the two countries, Mr Jaishankar expressed hope of a modern partnership between India and Indonesia through fashion.

He also visited the National Museum of Indonesia.

"Short break at the National Museum of Indonesia. Reminded of our common heritage," he tweeted.

Short break at the National Museum of Indonesia. Reminded of our common heritage. pic.twitter.com/HQsSup49Ih

The visit reflects the high priority India attaches to its bilateral relationship with Indonesia, with which "we share a Comprehensive Strategic Partnership and a Shared Vision on Maritime Cooperation in the Indo-Pacific," a press release issued by the Ministry of External Affairs said ahead of his visit to Indonesia.