"It's going to be a very nice weather and Inshallah, we're going to do it," one of the men says in the Facebook video. 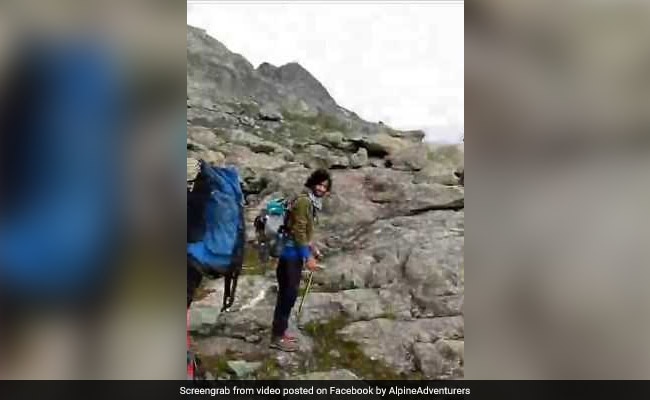 The Kashmiri trekkers went live on Facebook during their expedition to the the Kolahoi Glacier.

A trek to a glacier in Kashmir turned tragic for a group of 10 trekkers on Friday after three members fell into a crevasse while returning. Two men died and one was seriously injured. The remaining members were brought back to safety by rescue teams.

Days before their expedition came to an abrupt end, the men went  live on Facebook. The 1 minute 21 second-long video captures the team's excitement as they make their way up the mountainous paths.

"The team is doing all good," says the trekker who captures the video which was recorded on September 3.

The group had gone trekking to the Kolahoi Glacier, 26 km north of Pahalgam. The ten trekkers were returning when three of them -  Naveed Jeelani, Adil Shah and another man - fell into a crevasse. While Naveed and Adil died, the third person managed to survive. Naveed was a Jammu and Kashmir Excise and Taxation Officer and Adil worked with Alpine group, a tour and travel group in Jammu and Kashmir.

In the video, Adil can be seen waving at the camera.

"It's going to be a very nice weather and Inshallah, we're going to do it," one of the men says in the Facebook video.

Kolahoi is a five-kilometre-long glacier which serves as the water tower for Kashmir's river system and has been a favourite destination for ardent trekkers in the Valley.