I Held Slippers for Rahul Gandhi Out of Courtesy: V Narayanasamy 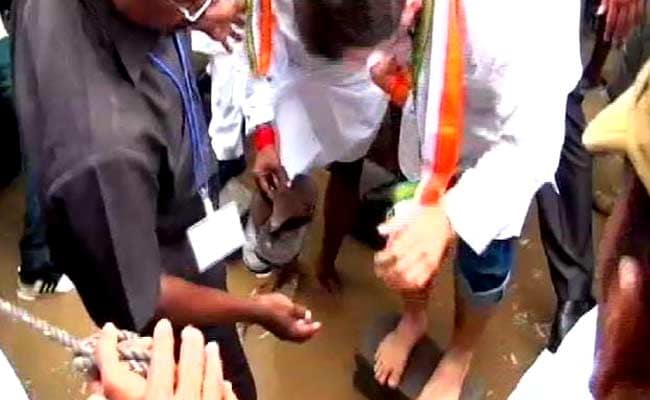 Chennai: After videos and images of former Union Minister V Narayanasamy holding slippers for Congress Vice President Rahul Gandhi went viral, Congress lawmaker on Wednesday said he did that out of courtesy to help Congress vice president wade through a flooded street in Puducherry.

On Tuesday, Mr Gandhi toured flood-hit regions of Puducherry and Tamil Nadu. During his visit to the Union Territory, regional Congress leaders, including Mr Narayanasamy had accompanied him.

The former minister was seen in a video holding the slippers while the Congress vice president removed his shoes to walk in a flooded area, and then placing them for him to slip into. Mr Gandhi was seen putting them on without much fuss.

Asked about it, Mr Narayanasamy said,"it was not Rahul Gandhi's slippers, it was mine and I was holding it for him to wear out of courtesy so that he could walk through a flooded neighbourhood."

"Rahulji was wearing shoes and he had to remove it as the street was flooded. As he got ready to walk barefoot, I offered mine as the flooded street had thorns and rough stones," he told PTI.

"I followed Rahulji by wearing another pair of slippers given to me by a party worker," he said.

A former Member of both Lok Sabha and Rajya Sabha, Mr Narayanasamy is a prominent Congress leader in Puducherry.