Hrithik Roshan posted pics of the trio from a snow clad mountain while Sussanne posted pictures, which shows a sunny day in California 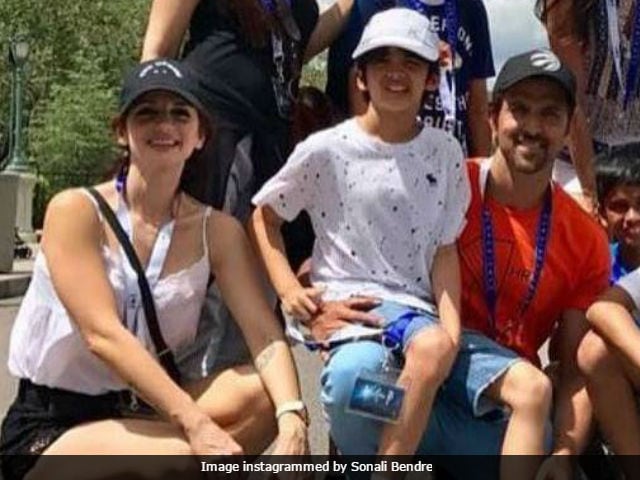 New Delhi: Sussanne Khan is posting latest pictures from her California holiday with Hrehaan and Hridhaan while her ex-husband Hrithik Roshan is posting pictures from what appears to be an earlier holiday, the actor took with his sons. We say so because in Sussanne's pictures things are sunny while Hrithik's posted pictures of the trio from a snow clad mountaineering trip. Interestingly, Hrithik is also holidaying with Sussanne, Hrehaan and Hridhaan in California. Actress Sonali Bendre and her son and Swades actress Gaytri Joshi are also travelling with the Roshans (and Khan). Here are Sussanne and Hrithik's contrasting pictures, posted just hours apart.

There's greater joy in unbridled laughter with these guys than the best shot I've ever given. You can't be the best if you don't give your best to everything you do.

Meanwhile, Hrithik doesn't feature (except in one collage) in the pictures Sussanne is uploading on Instagram but the Krrish actor is quite visible in pics instagrammed by Sonali Bendre. Take a look:

A magical experience is made even more special when it's shared with the ones you love. #Orlando #UniversalStudios #SummerVacay

Hrithik Roshan and Sussanne Khan, daughter of actor Sanjay Khan, were married from 2000 to 2014. Despite the separation, Hrithik and Sussanne often hang out together. Sussanne attended Hrithik's major family events - like birthday and anniversary parties. She's also frequently spotted at the screenings of Hrithik's films.

Hrithik and Sussanne also go on separate and combined vacations with their sons Hrehaan and Hridhaan. Recently, Hrithik took his sons out for a sea trip and posted pics with very funny captions. Here's a sample:

Him: '....and don't worry dad's totally cool with it. He said so.' Me: What. #deerinheadlights #becarefulwhatyouagreeto

Hrithik Roshan was last seen in Kaabil opposite Yami Gautam. He is reportedly putting together the script of Krrish 4 with his father Rakesh Roshan.
Comments
hrithik roshansussanne khanhrehaan hridhaan