Read inOther Languages
This Article is From Jun 28, 2020

The images of the embankment on the Galwan river-bend clearly indicate heightened Chinese military activity in a spot of great tactical importance. 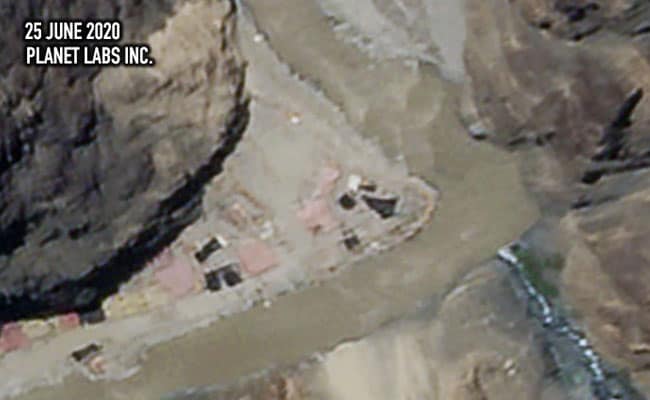 Satellite images of Chinese construction on the river-bend of the Galwan embankment.

A series of satellite images between May 22 and June 26 have enabled NDTV to piece together and visually showcase Chinese construction on the river-bend of the Galwan as it crosses the Line of Actual Control and flows into territory held by India in Ladakh.

It was in the area around this embankment, including at an Indian Army patrolling point called Patrol Point 14 (PP-14), that Chinese and Indian soldiers clashed on June 15. Twenty Indian soldiers and their Commanding Officer, a Colonel, were killed in action here. India believes at least 45 Chinese soldiers, including a Colonel suffered the same fate.

It has been widely reported that the embankment on the Galwan river-bend is in Indian territory, in other words a clear-cut intrusion by the Chinese Army. A line denoting the LAC here on Google Earth Pro appears to indicate that the extent of the intrusion is 137 metres. However, since the LAC has never been officially delineated in Ladakh (the root of the present dispute), the extent of the incursion can be debated.

What is clear, though, is that the Indian Army has patrolled up to the embankment area for decades. This is no longer possible because of Chinese construction activity in the Galwan basin which appears to end at the river-bend, in other words, the location of the embankment.

The embankment is crucial as it enables Chinese forces to look down the Galwan Valley towards Indian positions on the banks of the river a short distance away. A stone wall (sangar) constructed across the river on the bank opposite the embankment appears to be a defensive position of the Indian Army. Parts of this appear to have been submerged by rising waters of the fast-flowing Galwan in the latest images of June 26. No Indian soldiers appear to be present at the site. 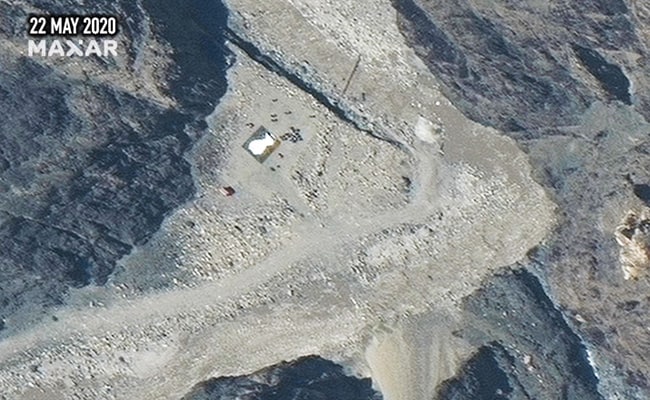 A single Igloo-style hut is visible on the Galwan embankment with approximately 20 soldiers visible.

The images acquired by NDTV from Maxar and Planet Labs indicate the presence of a single Igloo-style shelter on the embankment on May 22 and approximately 20 soldiers. It is unclear if these were Indian or Chinese soldiers. There is no construction activity visible around this structure on May 22. The next image, of June 16, comes a day after the fatal clashes between soldiers of both sides. All that is visible here in the image of June 16 is debris with no signs of any construction or of any soldiers.

The subsequent two images of this site are starkly different from what was visible earlier. High resolution satellite images from Maxar of June 22 appear to show the presence of rock fortifications on the embankment with parts of the area covered with what appears to be pink tarpaulin. At least 50 soldiers appear to be visible in the embankment area, including approximately 25 soldiers standing together just 150 metres away from the tip of the embankment (as it juts into the Galwan River). At least four new shelters are visible attached to the rock face near the embankment, none of which were present in the image of June 16 or in any of the previous images described. These shelters, which appear to be tents, are camouflaged in the colour of the rock face that they have been erected against. 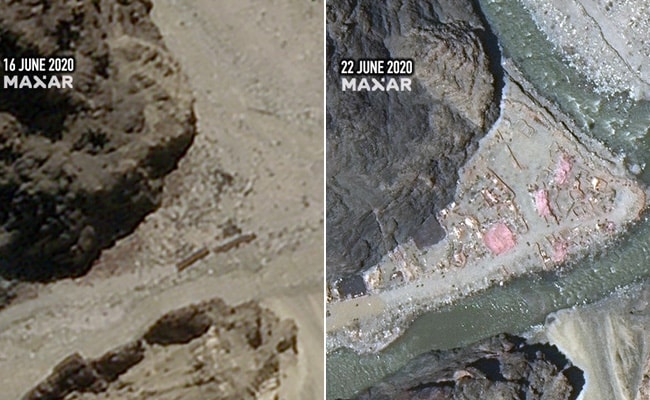 The final image shown here is a Planet Labs image from June 25 and seems to show consolidation of the embankment position. Some of the pink tarpaulins have been replaced with black coloured ones. The area itself appears to have been 'cleaned up,' with several of the rock fortifications no longer visible. The row of shelters along the rock-face seen in the images of June 22 is visible here as well. Significantly, the Galwan River appears in spate in this image. A part of the stone wall (sangar) erected on the opposite bank of the river (the Indian Army position) appears to have been submerged. The wall itself is not clearly visible. 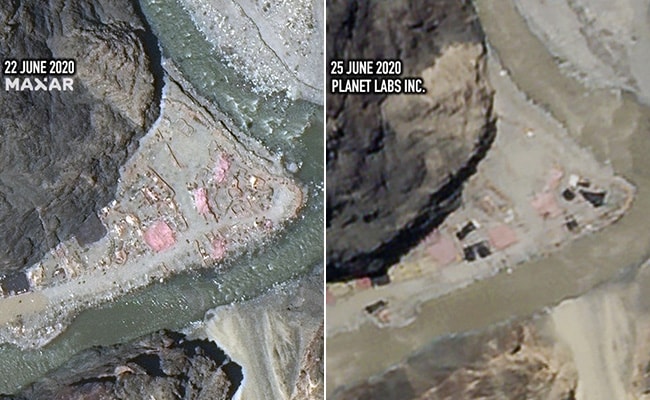 The images of the embankment on the Galwan river-bend clearly indicate heightened Chinese military activity in a spot of great tactical importance. The embankment is at the end of a nine-kilometre stretch where Chinese forces have broadened the valley on their side of the LAC, black-topped a part of the road, built culverts, deployed hundreds of vehicles and established as many as 16 camps (pre-fabricated huts) within this short stretch. These are all clear indicators that there are no signs of mutual military disengagement in the the Galwan Valley till June 26, the last date on which these satellite images were acquired.