The satellite images, procured from Planet Labs, indicate further consolidation of a key position by the Chinese military near the Line of Actual Control. 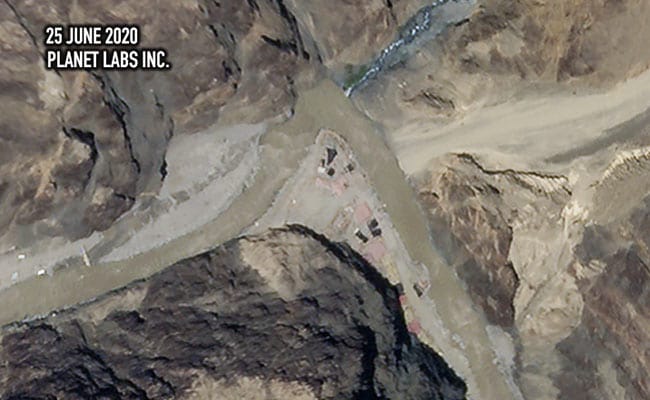 New satellite images of the Galwan Valley procured by NDTV show black tarpaulins on an embankment of the Galwan River, believed to be a Chinese position around the Line of Actual Control (LAC) in the region.

They also show the presence of not less than 16 camps of the Chinese People's Liberation Army within 9 kilometres of the LAC in this sector.

The images clearly indicate that China has not disengaged in the area and continues to maintain massive troop strength - a direct threat to the Indian Army operating on the Indian side of the Line of Actual Control. In widely reported military talks between Lieutenant General-ranked officers on June 22, both India and China had agreed to mutually de-escalate across all contentious areas in Ladakh.

The new images, procured from Planet Labs, are dated June 25 and June 26 (yesterday) and indicate further Chinese consolidation in the Galwan region. On June 15, 20 Indian soldiers, including a Colonel were killed in action fighting a large Chinese force here. The Army believes that the Chinese suffered 45 casualties during the late-night skirmish. Chinese military leaders are believed to have conveyed to their Indian counterparts the loss of a Chinese Colonel in the fighting here as well. 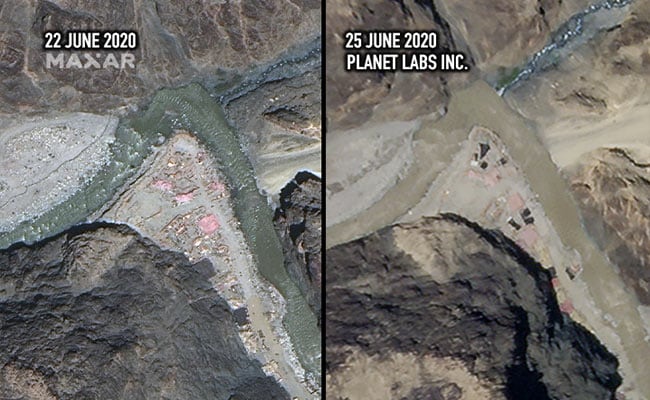 Visibile changes in Chinese position on Galwan River-bend between June 22 and June 25, 2020.

The new images also show the Galwan River in spate on June 25 with clear damage visible to what has been reported to be a stone wall (sangar) constructed by Indian forces across the Galwan River. No Indian Army camps are being shown in this report.

NDTV reached out to the Indian Army several hours ago for comment on the latest images showing construction activity in the Galwan region and will update this report should they respond.

The embankment, widely reported to be a Chinese intrusion just across the LAC, is of critical importance to Indian defences in the area. The location of the embankment, at a sharp turn in the course of the Galwan River, enables Chinese forces to look towards nearby Indian positions in the Galwan Valley.

The strategic Durbuk-Daulat Beg Oldie highway, a key artery in the Sub Sector North area of Ladakh is approximately 6 km away from Chinese positions on the embankment. It is believed that the Chinese intrusion in Galwan is linked to Beijing's concerns over the construction of this highway which provides Indian forces all weather access to this region. The highway leads up to Indian positions in the Karakoram Pass, a key strategic gateway from where Indian Army soldiers can monitor Chinese positions deep inside Aksai Chin.

The road also passes by the Indian Air Force airstrip at Daulat Beg Oldie where transport aircraft fly in to stock soldiers with equipment and supplies. Without the new road, access to Daulat Beg Oldie and other areas in sub sector north was through a route which would be blocked with heavy snow at high altitude passes during the winter. 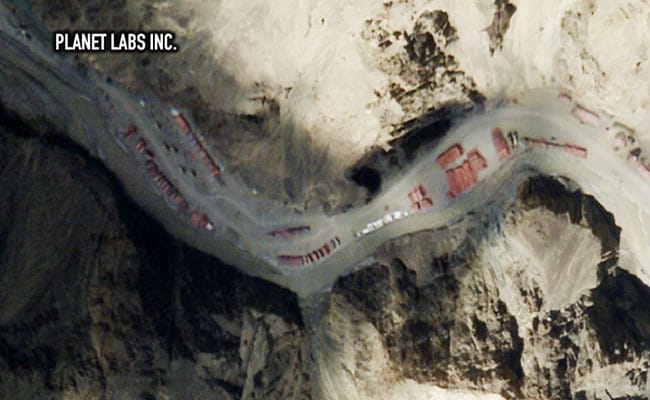 16 Chinese People's Liberation Army (PLA) camps located within 9 km of the Line of Actual Control in the Galwan Valley.

The new images of June 25 and June 26 also indicate, for the first time, the extent of the Chinese build up in the region. Satellite imagery experts NDTV has been in touch with have indicated the presence of more than 16 Chinese PLA camps within 9 kilometres of the Line of Actual Control in addition to hundreds of trucks, off-road vehicles and heavy earth moving equipment including bulldozers.

Chinese earth-moving equipment has been used to broad the valley in parts, construct culverts across the fast-flowing Galwan and enable road construction. A part of the track, close to the road-head near the embankment described above appears to show black-topping of the road surface.

The Chinese intrusions in the Galwan Valley are a part of a massive Chinese build-up along the disputed Ladakh frontier where the Line of Actual Control between India and China has not been settled. In a statement on Thursday, the Ministry of External Affairs has said, "Since early May, the Chinese side has been amassing a large contingent of troops and armaments along the LAC." This, the government believes is part of a change in the behaviour of Chinese soldiers on the ground which has "also been aggravated by unjustified and untenable claims."

Reports, often backed by high-resolution satellite imagery, have clearly indicated the extent of the Chinese intrusion in the Fingers Region of the Pangong Lake, Gogra/Hot Springs, the Galwan Valley and Daulat Beg Oldie to the North.

In a strong statement, India's ambassador to China Vikram Misri warned Beijing that trying to alter the status quo on the ground by resorting to force will not just damage the peace that existed on the border areas but can also have "ripples and repercussions" in the broader bilateral relationship, and demanded that the country stop its activities in eastern Ladakh.

The only way to resolve the current military standoff along the LAC in eastern Ladakh was for Beijing to realise that trying to "change the status quo by resorting to force or coercion, is not the right way forward," Ambassador Misri told news agency PTI in an interview.