'Hindu Religion Has Solution to All Problems in the World,' Says BJP Chief Amit Shah 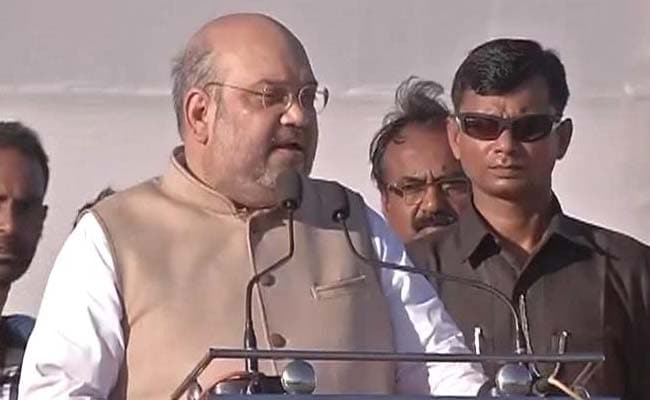 Ahmedabad: Addressing audience at a book launch in Ahmedabad, BJP chief Amit Shah on Sunday said that "Hindu religion has solutions for all problems in the world".

"I am not saying this because I am born Hindu," Mr Shah said while unveiling former President A P J Abdul Kalam's book 'Transcendence: My Spiritual Experiences with Pramukh Swamiji' at the Gujarat University convention.

"When I faced difficulty for two years, I visited each and every religious centre in India. In that period, I sought blessings from all the 'jyotirlings' and 'shaktipeeths' of India, except Somnath temple (in Gujarat)," Mr Shah said referring to the two years that he was barred from entering Gujarat due to legal proceedings in the Sohrabuddin Sheikh encounter case.

Mr Shah was acquitted in the Sohrabuddin encounter case in December last year by a Mumbai court.

"That was the time when I was not able to do my activities... Perhaps God made me seek his blessings in my youth," Mr Shah added.

He said that the religious leader of Swaminarayan sect, Pramukh Swami, has given a new lease of life to Hindu tradition with the powers of saints like Shankaracharya had done with the tradition of 'akhadas'.

Recounting an incident when he was the Mayor of Rajkot in 1980s, Mr Vala said he chose to felicitate religious leader Pramukh Swami by going against the local administration. "This is in my blood and this is in the 'sanskaras' of RSS that could lead me to even vacate the post of a Mayor," Mr Vala added. On the book written by the former president, Mr Vala said he feels that one saint is giving his opinions for the other saint.