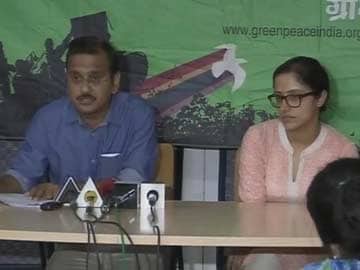 New Delhi: Greenpeace on Wednesday dismissed accusations levelled by the Intelligence Bureau that it was foreign funded and it aimed at stalling development.

"Greenpeace India believes that a lot of the facts are misrepresented; the intent of the campaigns are deliberately misunderstood and this is a conscious attempt to crush and stifle opposing voices in the civil society," said Greenpeace India spokesperson Abhishek Pratap in Delhi.

Addressing a press conference, he said the organisation was a threat not to development but to powerful corporate interests that "seek to bulldoze clearances at the cost of millions of people and the environment".

He dismissed accusations that Greenpeace India was receiving foreign funds.

He said that Greenpeace India through its campaigns hopes the new government will take bold measures to take India away from dependence on dirty coal and dangerous nukes to a future that not only meets the growth aspirations of the people, but also ensures equity in access to energy, and also keeps the carbon emission level under check.

"Instead of destroying our forests to access the coal underneath, we believe that our country should embrace the ambitious uptake of renewable energy and energy efficiency to meet the rapidly increasing energy needs of our growing country," said Mr Pratap.

Mr Pratap, however, said the government has shut its eyes to ecological sustainability in the name of coal mining.

He rubbished reports that Greenpeace has violated the provisions of the Foreign Contribution Act of 2010, and financed sympathetic studies at the Tata Institute of Social Sciences and IIT-Delhi.

"How can the IB come to that conclusion? We have never been served any notice for violating the provisions of the Foreign Contribution Act," Mr Pratap said.

He added the studies at TISS and IIT-Bombay - he clarified it was not IIT-Delhi - were to outsource the report on health impact and water being diverted in the Vidarbha region respectively.

"Yes, money was given by Greenpeace. We wanted to outsource report from IIT-Bombay on water being diverted in the Vidarbha region despite farmers struggling for water for their crops," Mr Pratap said.

He said that contrary to reports, Greenpeace did not support any Aam Aadmi Party (AAP) candidate in the 2014 Lok Sabha election.

"We had asked Pankaj Singh (AAP candidate from Sidhi, Madhya Pradesh) to resign as Greenpeace consultant when he decided to contest election, which was purely a personal decision for him," Mr Pratap said.

Promoted
Listen to the latest songs, only on JioSaavn.com
Mr Pratap rejected any notion that Greenpeace is renewing its campaign internationally to highlight that Indian IT/ITeS firms do not meet global standards on e-waste emissions.

"The truth is that we had recommended EVS legislation in the country. The government acted on the recommendation and we had the EVS Management and Handling Rule of 2012. We have all the right to ask whether companies are acting on the rule. We have asked this to four Indian and 18 global companies," Mr Pratap said.