Gol-Gappa Seller, Shot Dead In J&K, "Worked Hard To Get Out Of Poverty"

Srinagar: Eyewitnesses said a pistol-borne terrorist stopped near Arbind Kumar Sah's gol-gappa vending cart and shot him from point-blank range, killing him on the spot. 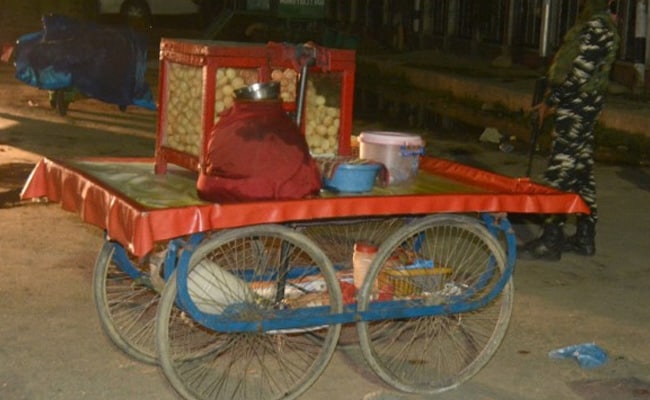 Arbind Kumar Sah was among two non-local residents killed by terrorists on Saturday.

Arbind Kumar Sah was selling golgappas -- a type of street food -- in Jammu and Kashmir's Srinagar city with the hope to earn enough money to improve the lives of his poverty-stricken family back home in Bihar. However, that dream of the 30-year-old was snapped in a jiffy by his assassin who showered bullets at him near his handcart outside a park in the Eidgah area of the city.

Eyewitnesses said a pistol-borne terrorist stopped near Sah's vending cart and shot him from point-blank range, killing him on the spot.

Sah, a resident of Banka district in Bihar, would sell golgappas every evening to strollers who came to the park and had made a few friends among them.

"He was a hardworking man. He had dreams of getting his family out of poverty back in Bihar. But that dream has died today," a middle-aged resident who did not want to be named said.

The resident said Sah would turn up at the gate of the park every day without fail.

"His business was brisk. He was a likeable man, maybe that's why he had good business. He would often talk about his folks and poverty in his hometown," the resident added.

While Sah was lying in a pool of blood, he was identified by police through his Aadhaar card and his day's earnings were scattered all around the cart.

He was among two non-local residents killed by terrorists on Saturday.

Saghir Ahmad, a carpenter from Saharanpur in Uttar Pradesh, was shot dead in Pulwama district.

Earlier this month, Virender Paswan, another handcart vendor, was killed by terrorists in the Hawal area of Srinagar.