Arvind Kejriwal was referring to Rahul Gandhi's tweet last week accusing the AAP chief of "another U turn", stalling an alliance. 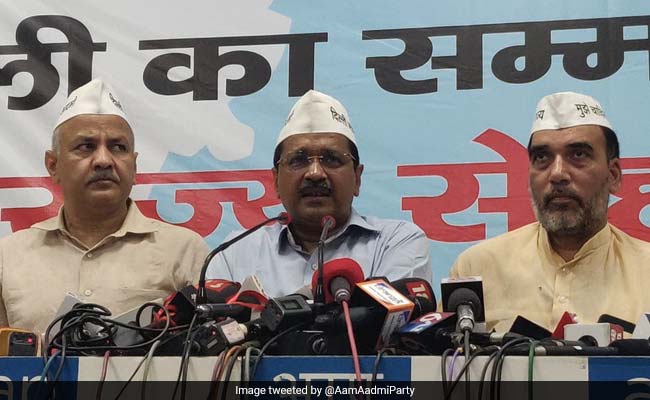 "If Modi, Shah return to power, only Rahul Gandhi will be responsible," Arvind Kejriwal told reporters

Which alliance is formed on Twitter, Arvind Kejriwal today questioned, blaming Rahul Gandhi for failed talks for a tie-up in Delhi between his Aam Aadmi Party (AAP) and the Congress. At the release of his party's manifesto for Delhi, the Chief Minister also said the Congress president would be the only person to blame if Prime Minister Narendra Modi returned to power.

Arvind Kejriwal was referring to Rahul Gandhi's tweet last week accusing the AAP chief of "another U turn", stalling an alliance.

"I want to ask Rahul Gandhi, which alliance is formed on Twitter?... They don't have intention (to forge an alliance). For the past two months, we have been trying for an alliance. I am saying this with huge sadness that if Modi and (BJP President Amit) Shah return to power, only one person will be responsible - Rahul Gandhi," Mr Kejriwal told reporters at the manifesto release.

This week, both the Congress and AAP named candidates for all seven Lok Sabha seats in Delhi, ending any possibility of a tie-up between the two after weeks of hard negotiations.

Both parties had held off on naming candidates, apparently leaving room for the slight chance that an alliance materialised.

Rahul Gandhi confirmed the negotiations for the first time when he tweeted on April 15: "An alliance between the Congress & AAP in Delhi would mean the rout of the BJP. The Congress is willing to give up 4 Delhi seats to the AAP to ensure this. But, Mr Kejriwal has done yet another U turn! Our doors are still open, but the clock is running out."

Until then, Mr Kejriwal had maintained that while his party was ready for talks, it was Rahul Gandhi who was the damper.

The talks crashed over AAP's insistence that a seat-sharing pact be extended to Haryana and Punjab. AAP pointed out that it would not need Congress's help to win the seven seats in Delhi but a tie-up would help limit the BJP in Haryana and in Punjab.

Attempts for a pact between the AAP and the Congress started more than a month ago with a meeting at Maharashtra politician Sharad Pawar's home, where Mamata Banerjee also urged Arvind Kejriwal and Rahul Gandhi to talk.