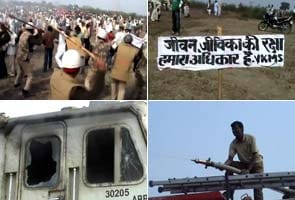 Aurangabad: Agitating farmers in Bihar's Aurangabad district set afire the engine of a passenger train in protest against the setting up of a power plant in the area.

The farmers raised slogans against what they called an unfair land acquisition policy by the Bihar government and the National Thermal Power Corporation.

Earlier in the day, police clashed with the agitating farmers in the Nabinagar area, resorting to lathicharge and tear gas shelling. About a dozen farmers were injured in the lathicharge.