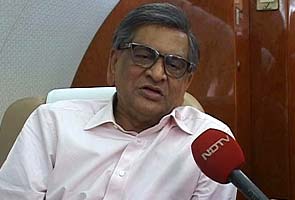 New Delhi: External Affairs Minister SM Krishna has resigned from the Cabinet. His resignation, sent to the Prime Minister's Office, comes just two days before an anticipated cabinet reshuffle. "I am making way for youngsters," Mr Krishna said in Bangalore after resigning. He is 80 years old.

Combined with that statement and the timing of his resignation before Sunday's likely reshuffle, sources in the government and the Congress are pointing to a fairly major revamp that is likely. Congress President Sonia Gandhi met Prime Minister Manmohan Singh this evening, cancelling a party meeting.

Though it is not yet known who will replace Mr Krishna, sources said that there is expectation that Rahul Gandhi might take up the ministry. But those close to him say that so far, he continues to be reluctant to join government. The other three names being speculated upon are Information and Broadcasting Minister Ambika Soni, Commerce Minister Anand Sharma and HRD and Telecom Minister Kapil Sibal.

The revamp of the Cabinet is likely to see the inclusion of several young faces. They are understood to be handpicked by Mr Gandhi. Others who are already in government, like Sachin Pilot and Jyotiraditya Scindia, might get independent portfolios. They are currently ministers of state.

Actor-turned-politician Chiranjeevi may also be inducted into the ministry as a reward for his help in ensuring the stability of the Congress government in Andhra Pradesh with the support of his 18 MLAs.

The Nationalist Congress Party (NCP) has already nominated Tariq Anwar to the government, in place of Agatha Sangma.

There are six berths vacated by the Trinamool Congress, which walked out of the government after differences over its reforms agenda. Deepa Dasmunshi, wife of Gandhi family loyalist and former minister Priya Ranjan Dasmunshi, could be inducted. Mr Dasmunshi has been in coma for the last few years.

Two cabinet positions of the DMK are also vacant, after A Raja and Dayanidhi Maran quit when they were implicated in the 2G scam. DMK chief M Karunanidhi has so far refused to nominate anyone.

The berth occupied by Vilasrao Deshmukh too will have to filled, after his death. Maharashtra's Vilasrao Muttemwar is likely to get in.

Congress sources say that Mr Krishna will be required in Karnataka to handle party affairs. "I am a loyal party worker and will continue to work for the party," he told NDTV.

Mr Krishna has served as the chief minister in the state. Mr Krishna is a Vokkaliga, which is politically a very influential caste in the state, and is likely to lead the Congress' campaign in the next assembly election and give the party a face in the state, which it is currently lacking.

However, sources in the party and the government also said that ahead of every reshuffle, there were rumours of Mr Krishna being removed, though he survived each of them. This time though, the change has been made to probably get someone younger and more dynamic into this crucial ministry.

Mr Krishna hit the headlines in 2010 when he read out parts of the Portuguese foreign minister's speech at a meeting of the United Nations Security Council in New York. His impact on foreign policy was seen by analysts as being marginal, with the PM and his senior advisors taking the lead on crucial issues such as relations with Pakistan.

Promoted
Listen to the latest songs, only on JioSaavn.com
Mr Krishna was named yesterday in a probe by the Karnataka Lokayukta court into the acquisition of land for the Mysore Bangalore expressway.

He was Karnataka chief minister from 1999 to 2004 and has studied in the United States as a Fulbright scholar.