"16 Days On, Murderers Still Roaming Free": Wife Of UP Cop Killed By Mob

Subodh Kumar Singh was attacked by a mob when he and his team had gone to a village to tackle protests after cow carcasses were found in a forest. He was hit in the head before he was shot dead

Rajini and Abhishek Singh have just returned to Noida from Etah.

It breaks my heart to hear the government call my husband's murder an accident, said the wife of the senior police officer who was killed by a mob in Uttar Pradesh's Bulandshahr.

"It's been 16 days and the main accused has still not been arrested. An SHO (station house officer) is killed on duty and they say he died of heart attack. I feel very sad for the man who lost his life in the line of duty," Rajini Singh, wife of Subodh Kumar Singh, told NDTV.

The family has just returned home and trying to piece their lives back together.

Subodh Kumar Singh was attacked by a mob when he and his team had gone to a village to defuse tension after cow carcasses were found in a forest. The protests escalated after activists of right-wing group Bajrang Dal came to the area and blocked a road with a truck carrying the dead cows.

He was first hit with a rock by a mob of around 400 people, who chased his car to a field and shot him dead. A 20-year-old local man was also killed in the mob violence.

In 2015, Inspector Singh, was the investigating officer in the dreadful killing of Mohammad Akhlaq in Dadri by a mob over suspicion of cow slaughter and consumption of cow meat. Sources say he was instrumental in getting the samples to the laboratory on time. However, he was transferred to Varanasi in the middle of the investigation. 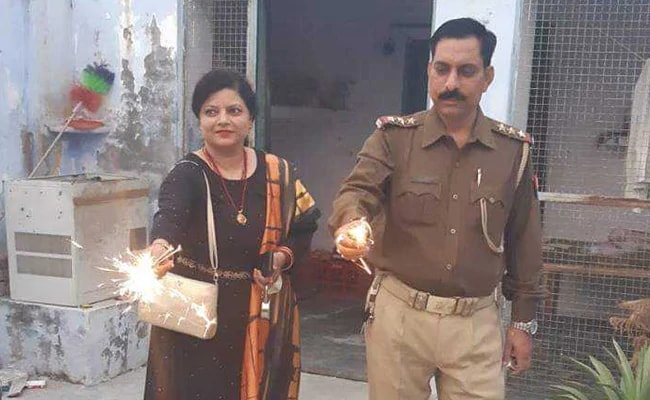 18 accused, including an Army man, have been arrested so far.

Yogesh Raj, the main suspect in the mob killing and a member of the Bajrang Dal, was the one who complained to the police on the cow carcasses and demanded action against cow slaughter.

Chief Minister Yogi Adityanath's security review meeting on the incident focused on action against cow slaughter but nothing was said on the murder of the police officer.

"I met Yogi ji and told him about my pain. He assured me that my husband's killers will be arrested soon. But the killers are still roaming free? I want to ask Yogi ji, why haven't they been arrested?" Rajini Singh said.

She wondered why the police have failed to arrest a man, Yogesh Raj, who has been sending out videos declaring his innocence. She added that local BJP leader Shikhar Aggarwal, another accused, has also been releasing videos, but the police haven't been able to reach him.

Both Shikhar Agarwal and Yogesh Raj are among the 27 people named in the FIR or first information report. Twenty accused, including an Army man, have been arrested so far.

The police say they need evidence. Ms Singh alleged that evidence has been destroyed. Without naming anyone in particular, she said, "They are protecting their own people and destroying all the evidence one by one. Nobody is there to tell what exactly happened there on that day."

The politicians are protecting the accused, alleged Abhishek Singh, the police officer's son, at his home in Noida. "What else explains the delay in arresting Yogesh Raj. What's stopping the police? I just hope that my father's murder doesn't end up as a file covered in dust," Abhishek, who wants to be a criminal lawyer, said.

Putting out a message against violence and "mob culture", Abhishek said, "I hope a day doesn't come when we are killing each other."

"UP has the rule of law. No one has the freedom to break the law and no one can break it. In this case (Bulandshahr) we have acted with transparency and will continue to do so," Mr Adityanath said in Guwahati on Monday.