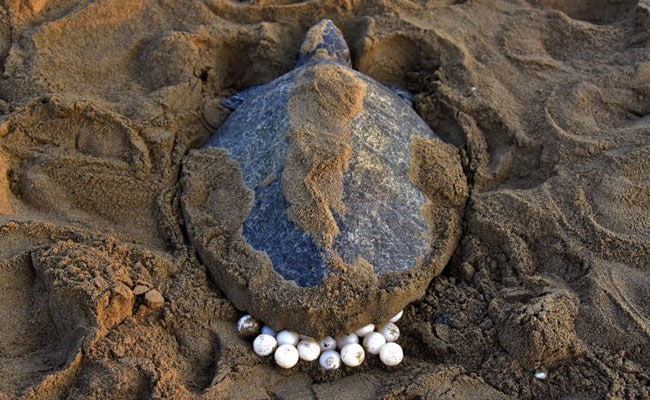 Bhubaneswar: The endangered Olive Ridley turtles have laid a record 3.55 lakh eggs on Odisha coast within a span of one week, an official said on Monday, bringing cheers to the wildlife conservationists, who are working exhaustively to prevent the rare species from being extinct.

"Over 3,55,000 eggs have been laid by Olive Ridley sea turtles within a week of mass nesting in the Rushikulya river mouth of Ganjam coast, making an all-time record. The turtles had laid 3,09,000 eggs last year," said Ashish Kumar Behera, the Divisional Forest Officer of Berhampur division.

He predicted that the number of eggs laid would touch four lakhs this year as the Saturday night calculation was not yet over.

"The egg laying process that began on February 13 is likely to end on Monday," he said.

The Odisha Forest Department has arranged high security to ensure a smooth and safe process of hatching by the endangered turtles, the official said.

"We have already made all arrangements, including establishing observation camps. The coasts have been fenced with nets and have started thorough patrolling in the sea for the protection of the turtles and their eggs during the mass nesting," added Behera.

The Forest Department has also deployed speedboats and trawlers with security officials to guard the coast and restricted the entry of fishing trawlers into the zone.

Promoted
Listen to the latest songs, only on JioSaavn.com
After laying eggs, the female turtles go deep into the sea without waiting to see the hatchels, which generally emerge after around 45 days of nesting.

Olive Ridley, the smallest of the sea turtle species gets its name from the olive green colour of its shell. The turtles are unique because of their synchronised mass nesting, when tens and thousands of female turtles crawl to the sea beach, in a well-coordinated manner, to nest for a few days.