This was also the first time since 1952 that the Left Front did not end up with double digits in the general election. 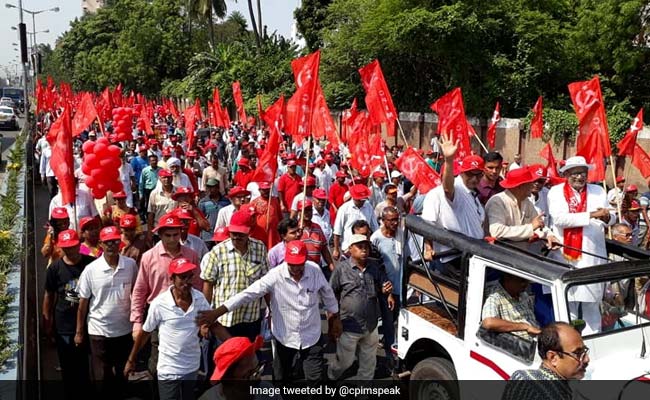 The Left Front enjoyed its golden period in electoral politics in the 1990s and early 2000s. (FILE)

Registering its worst poll performance in over six decades, the Left Front was virtually wiped off its bastions with the Lok Sabha poll results showing it managed just five seats across the country.

In West Bengal, it was a debacle wherein all but one Left-wing party candidates lost their security deposits.

"The political ideology of the Left still has relevance, but it is not in tune with electoral politics. We need to do serious introspection, rework strategies, reorganise and reconnect with the masses," CPI leader D Raja said, adding that young blood had to be infused to resurrect the Left in the country.

Once a Left stronghold, the CPI(M) has one seat in Kerala - Alappuzha. Another Left party, the Revolutionary Socialist Party (RSP), has won the Kollam seat in Kerala, but it is a part of the ruling Congress-led United Democratic Front (UDF) in the southern state.

In West Bengal, a state ruled by the Left for 34 uninterrupted years, it has drawn a blank, while it had won two seats in the state in 2014.

Five years since, it has not even managed to bag the second spot in any of the state's 42 Lok Sabha seats.

"To think that the Left Front has an ideological influence over people is the basic failure of the Left parties. Communities seem to be Left-leaning because of class interests like farmers, who feel their issues will be addressed by these parties. However, I am not sure they vote for the Left as their ideology may be different.

"The Left has failed to culturally influence them with its ideology and, thus, it remains confined to their basic class interests," professor, author and Left ideologue Chaman Lal said.

It had governments in three states during this period and held around 55-60 seats in Parliament. It played the role of kingmaker for the Third Front governments during 1996-98 by joining a 13-party coalition and for the Congress-led United Progressive Alliance government in 2004.

However, with the loss at the hands of the Mamata Banerjee-led Trinamool Congress in West Bengal in 2011, to the Bharatiya Janata Party in Tripura in 2018 and staring at a humiliating defeat against the Congress in Kerala in the 2019 Lok Sabha polls, its ideological influence seems to be waning.

"When we talk of the Left's relevance, we have to differentiate between the Left ideology and the Left-leaning political parties. The Left ideology is based on equality and the parties have not been able to reach out to the people and explain it. They are in electoral politics, but they never prepared themselves for it.

"They have never fought for power at the Centre. They have never contested over 100 seats. So, they are perceived by the voter to be an ally, a regional force, never the prospective ruling party at the Centre. Their flaw also lies in the fact that they think that the Left ideology has an answer to all problems. Due to this arrogance, they have failed to reinvent themselves with the changing times," Apoorvanand, a professor of the Delhi University, said.