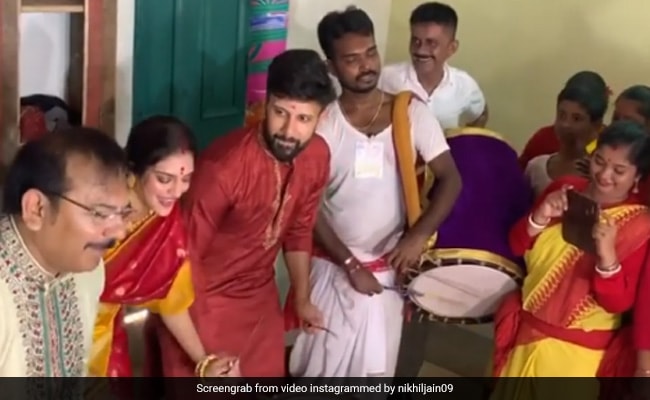 The first-time parliamentarian Nusrat Jahan and her businessman husband Nikhil Jain offered their first 'anjali' together to goddess Durga during the ongoing Durga Puja festivities in Bengal. The actor-turned-politician got married earlier in June this year.

Dressed in traditional clothes, the couple offered prayers to Goddess Durga and also played dhaak, a musical instrument, as part of Durga Ashtami celebrations on Monday.

The two shared pictures and videos from the Durga Puja celebrations online which were widely shared and liked on social media.

"I have prayed for people around us so that they live a peaceful and happy life so that whatever situation we are in it soothes down. We all are part of a big family here in Bengal," Ms Jahan, the Trinamool Congress MP, told news agency ANI.

When asked about offering puja being a Muslim, the MP from Basirhat, said, "I think I have my own way of portraying harmony towards all religions. Born and brought up in Bengal, I feel I am doing right by following culture and tradition. Here, we celebrate all the religious festivities."

Echoing similar thoughts, her husband said, "A lot of people are affected by inter-religion marriage. Nusrat's visit to the Hindu event is actually a positive message for India. I think every citizen of India irrespective of their religious identity should accept all religions."

Earlier Ms Jahan and her friend Mimi Chakraborty, also a first-time parliamentarian danced to the song 'Ashey Maa Durga Shey' as a tribute to Goddess Durga. The video has collected millions of views on Facebook.

Durga Puja festivities will culminate tomorrow, October 8, with Vijayadashami when  the idols of Goddess Durga will be immersed in the water bodies.