"No To CAA, NRC" Rangoli At MK Stalin's House To Protest Citizenship Law

Alongside the rangoli known as "kolam"in Tamil, a word was drawn which said "vendam (don't need/no) CAA-NRC." 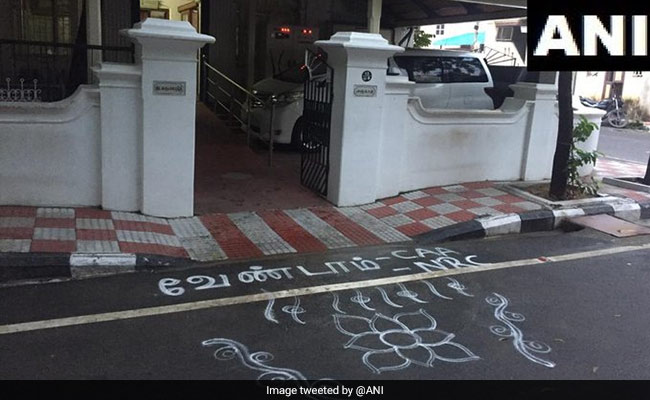 Expressing solidarity with "rangoli protesters" against the Citizenship Amendment Act, the entrance of DMK president MK Stalin's house sported a traditional rangoli saying no to the contentious law.

Alongside the rangoli known as "kolam" in Tamil, a word was drawn which said "vendam (don't need/no) CAA-NRC."

Eight people, including five women, were detained briefly on Sunday when they staged an anti-CAA protest by drawing ''kolams''.

The group of eight held the protest in the Besant Nagar locality in South Chennai.

They used the ''kolams'' to express opposition to the CAA and National Register of Citizens and National Population Register and raised slogans "No to NRC" and "No to NPR" before police took them into custody.

Mr Stalin had slammed the police action and hit out at he AIADMK government.

He said the police "has not even allowed the basic right under the Constitution" to voice dissent.