A Madhya Pradesh Police anti-terror squad has arrested a doctor for allegedly sending suspicious envelopes to Lok Sabha MP Pragya Singh Thakur in October last year. Pragya Thakur had claimed the envelope contained an unidentified chemical that caused a burning sensation. Sayyed Abdul Rahman Khan, an Ayurveda doctor who runs a private clinic in Nanded in Madhya Pradesh, allegedly sent a letter with the envelopes that referenced Ansarul Muslimeen, a group reportedly tasked with killing the BJP leader and then carrying out 26/11 and Pulwama-style terror attacks.

Pragya Singh Thakur had lodged a complaint with the Kamla Nagar Police Station in Bhopal on charges of criminal intimidation and voluntarily causing grievous injury; the envelopes, some of which had letters in Urdu, were sent to her residence but she was away at the time and they were only opened on her return on Monday.

The letter also referenced the Pune-based brother of Sayyed Abdul Rasham Khan as being among those assigned the task of killing Pragya Singh Thakur.

Police sources said the accused had posted the envelope to frame his brother and mother over a property dispute. He had also had a dispute with his brother and was arrested on assault charges. 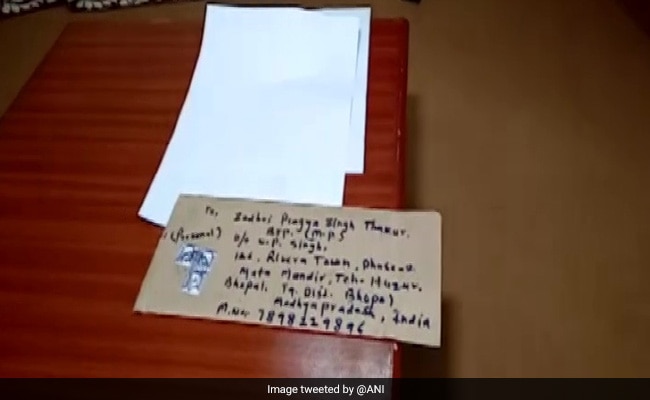 Pragya Thakur claimed the envelopes had a chemical substance inside

According to Inspector Pradeep Kakade, a Maharashtra Police officer posted to Nanded, the Madhya Pradesh anti-terror squad had been tracking Sayyed Abdul Rahman Khan, 35, for three months; he had earlier written letters to government officials claiming his mother and brother had terror links.

"The police tried keeping a tab on him using his mobile phone location. However, he would leave his phone at home and travel to Aurangabad, Nagpur and other cities to post these letters," Mr Kakade was quoted as saying by news agency PTI.

Pragya Thakur is a first-time parliamentarian and was elected from Madhya Pradesh's Bhopal, where she beat veteran Congress leader Digvijaya Singh by over 3.6 lakh votes. The controversial MP, currently out on bail in the 2008 Malegaon blasts case, has made headlines frequently.

Last month she was caught on video shouting and arguing with fellow passengers aboard a SpiceJet flight; she had been asked to move from a pre-alloted seat due to rules that forbid wheelchair-bound passengers sitting in emergency rows.

In July last year she was admonished for telling party workers she "wasn't elected to get drains and toilets cleaned". A few months earlier, while campaigning ahead of Lok Sabha polls, she sparked fury from the opposition after describing Nathuram Godse, Mahatma Gandhi's assassin, as a "patriot".