The decision came hours after a group of former National Conference MLAs met Farooq and Omar Abdullah to "enquire about their well-being". 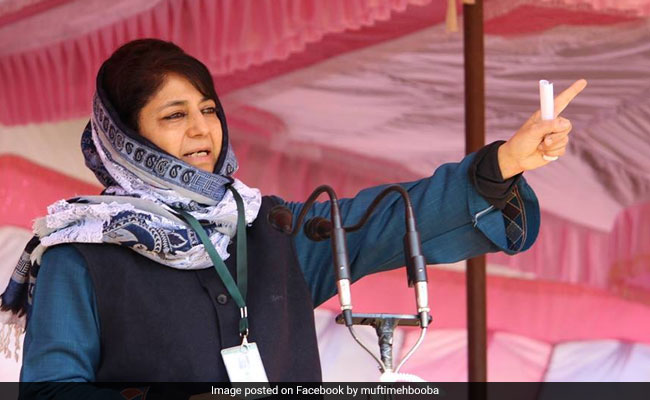 PDP chief Mehbooba Mufti has been under detention for over two months now.

A delegation of the Peoples Democratic Party (PDP) from Jammu will be allowed to meet detained party chief Mehbooba Mufti on Monday. The Jammu and Kashmir administration consented to the meeting on Sunday, shortly after a team of former National Conference MLAs visited party leaders Farooq and Omar Abdullah for the first time since their detention two months ago.

Mehbooba Mufti and the Abdullahs were among a number of political leaders from the Valley placed under detention on the eve of August 5, when the centre scrapped the special status accorded to Jammu and Kashmir under Article 370 and bifurcated it into two union territories.

According to PDP spokesperson Firdous Tak, the delegation will be led by party general secretary Ved Mahajan. "A meeting is being held to finalise the delegation that will leave for Srinagar to meet the party president tomorrow. The strength of the delegation will most probably be of 15 or 18 members," news agency PTI quoted him as saying.

The request for a meeting with Mehbooba Mufti was made on Sunday morning, he added.

After meeting the Abdullahs earlier on Sunday, senior National Conference leaders Akbar Lone and Hasnain Masoodi told NDTV that they had only come to enquire about their well-being -- not discuss politics. Omar Abdullah, sporting a beard, clicked selfies with the leaders during the meeting.

The government had relaxed the restrictions in Jammu and Kashmir days after the announcement of the Block Development elections. While all detained political leaders in Jammu were released, Farooq Khan, advisor to Governor Satya Pal Malik, said the Kashmiri leaders would be released in a phased manner.

Although Mehbooba Mufti does not have access to social media, her daughter Iltija continues to make critical observations on the Kashmir scenario from her Twitter handle with "due authorisation". Two weeks ago, a tweet posted from her handle criticised the manner in which a "move ostensibly taken to secure the special interests of Jammu and Kashmir" was being cheered by everybody but the people it was supposed to benefit.

After meeting the Abdullahs, the National Conference delegation led by Devender Singh Rana reiterated its demand that the centre release all detained political leaders with immediate effect to ensure normalcy in the region. "We, as a party, appeal that for the political process to start and democracy to revive in Jammu and Kashmir, political detenues anywhere and everywhere -- be it mainstream political parties or otherwise, who have no criminal record -- may be released," he said, adding Kashmir was in a state of "anguish" over the ongoing lockdown.