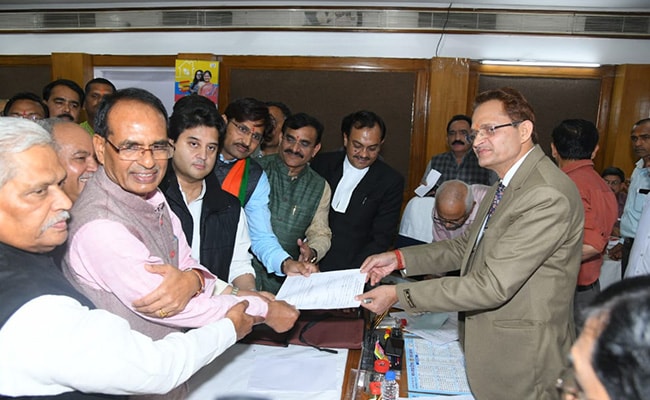 BJP leader Jyotiraditya Scindia has filed nomination papers for Rajya Sabha elections due in Madhya Pradesh on March 26. Mr Scindia, whose dramatic crossover from the Congress this week has left the Kamal Nath government in the state on the brink of collapse, will face a familiar face in his electoral bid - senior Congress leader and former Chief Minister Digvijaya Singh, who filed his papers on Thursday.

Jyotiraditya Scindia, 49, had been nominated by the BJP mere hours after he joined the party at its headquarters in Delhi on Wednesday. This came a fortnight after he criticised the BJP for spreading "politics of hate" during violence over the citizenship law in Delhi last month.

He had walked away from the Congress after the party reportedly failed to keep its promise of making him a first preference candidate for a Rajya Sabha post.

The former Union Minister and four-time Lok Sabha MP (he lost the family stronghold of Guna in national elections last year) made his first visit to the Madhya Pradesh BJP office Thursday night, taking part in a grand roadshow that concluded with a roti, subzi and dal dinner with one-time rival and former Chief Minister Shivraj Singh Chouhan of the BJP.

However, in a reminder that wounds caused by his defection were still fresh, he was also shown black flags during his roadshow.

Three Rajya Sabha seats, including the one currently held by Digvijaya Singh, will fall vacant next month. The race for these seats will be keenly followed, particularly since the BJP is expected to hold the upper hand in two of the three. 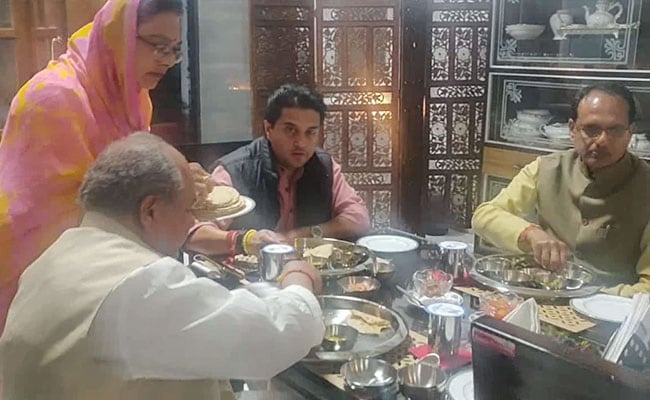 As per the law, the candidate who gets 58 first preference votes from sitting MLAs in the 230-member Assembly will win the election. However, after 22 MLAs resigned - they were flown to BJP-ruled Karnataka on Monday - that number has dropped to 52.

This gives the BJP the advantage, as the Congress now has only 99 MLAs and can elect only one member unopposed. The BJP, with 107 MLAs, should be able to win two seats.

This calculation is dependent on Assembly Speaker NP Prajapati accepting the resignations.

On Wednesday Mr Prajapati said he would go by the rules in this matter and demanded the MLAs meet him in person before he accepted their resignations. 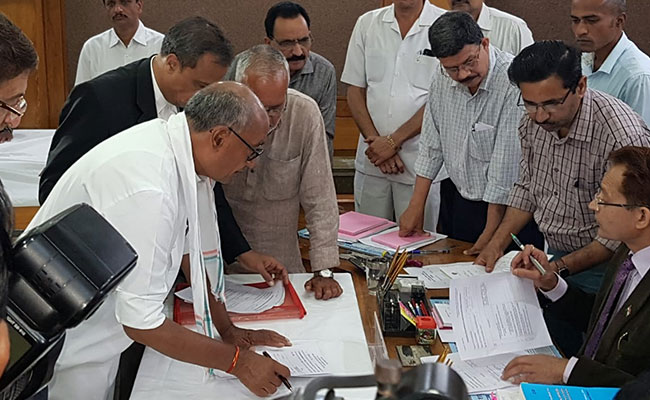 The second Congress nominee in this round of Rajya Sabha elections is Phool Singh Baraiya. The second BJP nominee is Sumer Singh Solanki.

The Madhya Pradesh government crisis, triggered by the resignations of both Mr Scindia and the 22 MLAs, will likely include a floor test in which the Congress and Chief Minister Kamal Nath will have to prove their majority.

Should the resignations be accepted, the ruling Congress will have 99 MLAs (including six allies) to the BJP's 107. The new majority mark in the Assembly will be 104.