India said that it called for a focussed attention to address the threats by the D-Company, the Jaish-e-Mohammed (JeM) and the Lashkar-e-Taiba (LeT). 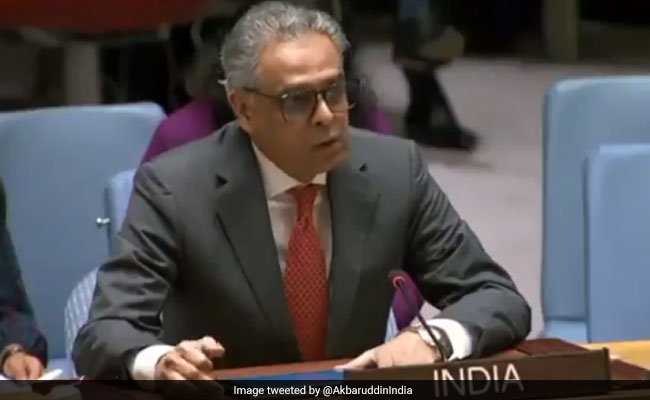 In a veiled attack on Pakistan, India has told the United Nations Security Council (UNSC) that Dawood Ibrahim's illegitimate activities from a "safe haven" that refuses to acknowledge even his existence pose a real danger.

India said that it called for a focussed attention to address the threats by the D-Company, the Jaish-e-Mohammed (JeM) and the Lashkar-e-Taiba (LeT).

Terrorist organisations are increasingly involved in lucrative criminal activities such as trading in natural resources and human trafficking to raise funds, India's Permanent Representative to the UN Ambassador Syed Akbaruddin said on Tuesday.

Similarly, criminal groups are joining hands with terrorists and are providing services such as counterfeiting, illicit financing, arms dealing, drug trafficking and smuggling terrorists across borders, he said at the Security Council debate on "Threats to International Peace and Security: Linkages between International Terrorism and Organised Crime".

"In our own region, we have seen the mutation of Dawood Ibrahim's criminal syndicate into a terrorist network known as the D-Company.

"The D-Company's illegitimate economic activities may be little known outside our region, but for us, such activities as gold smuggling, counterfeit currency, as well as arms and drug trafficking from a safe haven that declines to acknowledge even his existence, are a real and present danger," Mr Akbaruddin said.

He emphasised that the success of a collective action to "denude" the ISIS is a pointer that the UNSC''s "focused attention can and does yield results".

"A similar degree of interest in addressing the threats posed by proscribed individuals, such as Dawood Ibrahim and his D-Company, as well as proscribed entities, including the Jaish-e-Mohammad (JeM) and the Lashkar-e-Taiba (LeT), listed as affiliates of al-Qaeda, under the 1267 sanctions regime, will serve all of us well," he said.

Pakistan's Foreign Office last week said "Dawood Ibrahim is not in Pakistan", a day after a UK court was informed that the underworld don wanted for the deadly coordinated bombings in Mumbai in 1993 is currently in exile in the country.

During the ongoing extradition trial of 51-year-old Jabir Moti, a "high-ranking member of D-Company", Westminster Magistrates' Court in London heard that Dawood is currently in exile in Pakistan.

"The head of D-Company is Dawood Ibrahim, an Indian Muslim currently in exile in Pakistan. Dawood Ibrahim and his brother and top lieutenant, Anis Ibrahim, have been fugitives from India since 1993, when D-Company was implicated in coordinated bombings in Mumbai that killed more than 200 people," according to a US Attorney's affidavit for extradition read out by Jabir Moti's barrister Edward Fitzgerald.

External Affairs Ministry Spokesperson Raveesh Kumar has said that Pakistan's stand that Dawood was not present in the country exposed its "double standards".

Mr Akbaruddin stressed that terrorism and organised crime are both "manifestly malicious organisms drawing sustenance from the same deadly swamp."

"At times, they co-exist; at other times, they cooperate; and in instances, they converge. As the world becomes more interconnected, these menacing networks are becoming increasingly intertwined," he said.

Terrorist and criminal groups rely on strategic recourse to unsanctioned and illegitimate use of violence to undermine governance and development, he told the UNSC.

"Both lead to destabilising established state structures, thereby undermining and threatening international peace and security," he said, adding that revenues generated by illicit activities of terrorist and criminal groups are moved across borders and exchanged through open networks.

Mr Akbaruddin asserted that this flow of resources, meant to produce violence and terror, needs to be stopped by states working together.

"Collective inter-state efforts are required, including at regional and sub-regional levels. We also need to sensitise the private and public enterprises involved in facilitating legitimate transboundary financial flows and we should harness their support, so that they do not fall prey to malevolent objectives, in the vein of Osama bin Laden's string of retail honey shops," he said, in a reference to the al-Qaeda leader's reported use of network of shops that sold honey to provide finances for acquiring drugs and arms for the terror network.

Mr Akbaruddin also called for normative efforts at the UN to be coordinated through collaboration with other fora like the Financial Action Task Force (FATF).

"We believe that the FATF is playing a significant role in setting global standards for preventing and combating money laundering and terrorist financing. The UN needs to increase cooperation with such bodies," Mr Akbaruddin said.

"Finally, our collective commitment to implement what we agree upon in this body will go a long way in acting as a catalyst in pursuit of our common good," he said.