Chief Minister Vasundhara Raje has admitted that recent crimes, including those by cow vigilantes, against minorities in the state show Rajasthan in a bad light, but stressed that firm action will be taken against those behind the violence. 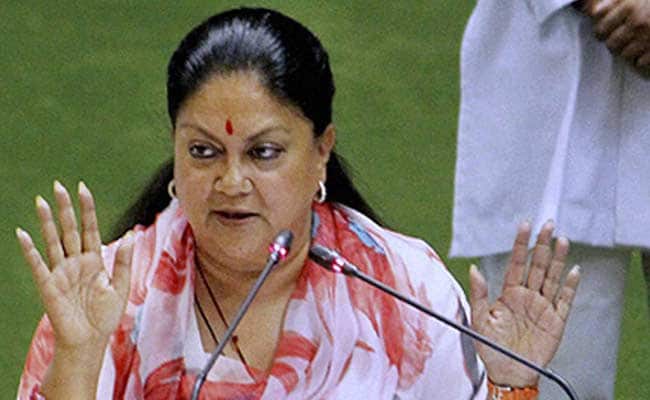 Jaipur: Chief Minister Vasundhara Raje has admitted that recent crimes, including those by cow vigilantes, against minorities in the state show Rajasthan in a bad light, but stressed that firm action will be taken against those behind the violence.

"The law of the land prevails in Rajasthan, and the government will ensure the culprits are brought to book," she said.

In April, 'gau rakshaks' or cow vigilantes attacked a 55-year-old cattle trader, Pehlu Khan, in Alwar and injured four of his companions. He later succumbed to injuries.

A month later, the desert state hit the headlines again when a video -- showing Sikh men allegedly being thrashed by villagers in Ajmer - surfaced.

"Rajasthan cannot be singled out. Such incidents are happening across India. But this government will not tolerate such crimes as it shows the state in a bad light," Ms Raje told PTI in an interaction.

She said the administration acted "swiftly" and the perpetrators were arrested in the Pehlu Khan case.

The Chief Minister, who is due to complete her term next year, said, "We do not discriminate among people on any lines. In less than a week, the accused in the honour killing of a Kerala engineer were arrested and a thorough inquiry was also ordered into the Ajmer incident."

In a suspected case of honour killing, 28-year-old Amit Nair, a civil engineer, was shot dead last week allegedly by his in-laws here for marrying a Rajasthani woman.

"Though our government did its part, the Kerala government is yet to speak out on the killings of BJP and RSS workers," said Ms Raje.

The Chief Minister said she planned to make development her party's poll plank for the state Assembly elections.

Promoted
Listen to the latest songs, only on JioSaavn.com
The Centre and the state were actively working for the people, she said, adding that her party, the BJP, was "likewise an active organisation".

The state had seen a "rapid" growth in every sector in the last four years, she said.