Read inOther Languages
This Article is From May 02, 2020

18 Migrants Found In Cement Mixer, They Were Trying To Reach Lucknow

Coronavirus lockdown: A video shows the truck parked along the side of a road while, one by one, migrant labourers with their few belongings in tattered cloth bags emerge from the steel drum

In deeply distressing scenes 18 migrant workers desperate to return home to Lucknow in Uttar Pradesh amid the coronavirus lockdown were found stuffed inside a concrete mixer on a highway in Madhya Pradesh this morning.

Police officers stationed on the border between the state's Indore and Ujjain districts stopped the truck to check for illegal movement of people during the nationwide lockdown. Alerted by the truck driver's nervous reaction, the cops checked the massive drum in which large quantities of cement and other materials are mixed to produce concrete for construction activities.

To their shock, when they opened the lid 18 men were sitting inside.

A video of the incident shows the concrete mixer parked along the side of a road while, one by one, migrant labourers with their few belongings in tattered cloth bags emerge from the steel drum, the entrance to which is barely wide enough to fit a human being.

#WATCH 18 people found travelling in the mixer tank of a concrete mixer truck by police in Indore, Madhya Pradesh. DSP Umakant Chaudhary says, "They were travelling from Maharashtra to Lucknow. The truck has been sent to a police station & an FIR has been registered". pic.twitter.com/SfsvS0EOCW

"How many more people? How many people are there inside?" a man, presumably a police officer, can be heard asking.

A second man can be heard ordering the migrants to stand by the side of the road and maintain a gap between each other to ensure social distancing. "Count them," the second man orders.

Madhya Pradesh Police have said an FIR (first information report) has been registered and the truck sent to a police station. The migrants were taken to a quarantine centre where they were screened for infection. The state government is currently arranging for their transport to Lucknow via bus. 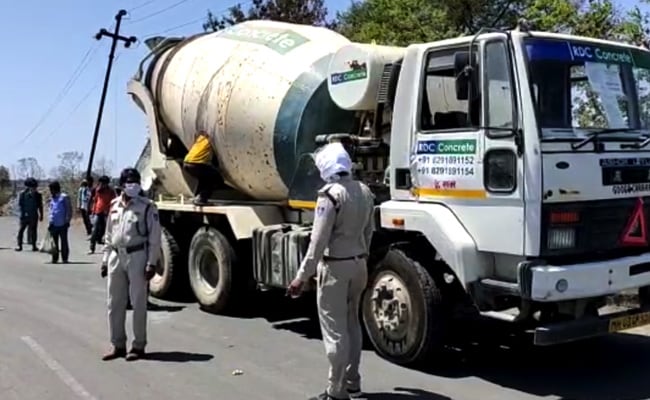 Lakhs of migrants and others were left stranded after the nationwide lockdown began on March 25. The centre had said migrants would be looked after, but the reality indicated otherwise, with reports of hunger coming in from various corners of the country.

As economic activity came to a sudden stop during the lockdown, thousands were left without jobs, money, food or shelter and, with interstate transport shut, had no choice but to find some way to travel hundreds, often thousands, of kilometres, triggering a humanitarian crisis.

This morning a man attempting to return to UP on a bicycle died in Madhya Pradesh's Barwani district; it was the third death in Barwani in the last 10 days.

Last week 94 migrants and their families were found squeezed into the back of truck while attempting a despairing 1,000-km journey from Haryana to Bihar.

Only days ago the government permitted migrants stranded by the lockdown to return home by road, providing they displayed no COVID-19 symptoms.

Citing a logistics problem state governments asked for special trains to be run. Five such trains were flagged off on Friday, with several more expected in the next few days. One of the trains - from Nashik in Maharashtra - arrived in Madhya Pradesh's Bhopal this morning, carrying around 350 migrants.

However, as per the Railways, only people nominated by state governments will be allowed to board these trains. The first train left Telangana, where there are an estimated 15 lakh migrants, for Jharkhand on Friday.

The nationwide lockdown has been extended by two weeks; it was scheduled to end on May 3.