The prayers, which have been going on round the clock since Sunday morning, were initially planned at the "temple" dedicated to Bachchan in the Bondel Gate area of the city but had to be shifted due to waterlogging, following incessant rains. 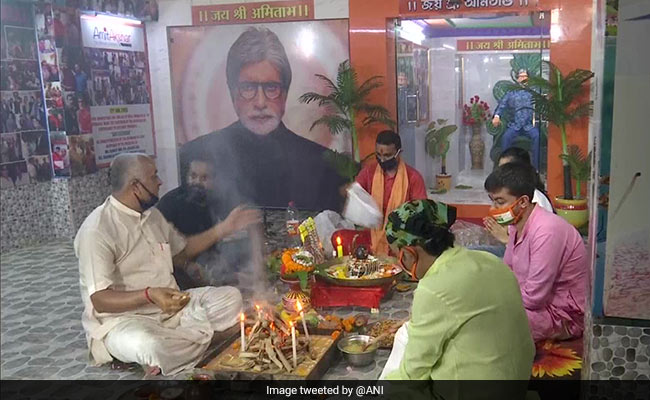 A grand idol of the superstar graces the "temple", which was built in 2001.

Fans of Amitabh Bachchan in Kolkata have organised "mahamritunjay yagna", which they said would continue till the Bollywood superstar and his family recover from COVID-19.

The prayers, which have been going on round the clock since Sunday morning, were initially planned at the "temple" dedicated to Bachchan in the Bondel Gate area of the city but had to be shifted due to waterlogging, following incessant rains.

"We will continue the yagna till all members of the Bachchan family recover, which we know is a matter of few days," said Sanjoy Patodia of the Amitabh Bachchan Fans Association.

"We had initially planned the "yagna" at the temple of the "Shahenshah" (king of kings) of the Indian film industry, but due to the rains and waterlogging we are holding the rituals in my flat, located next to the temple," he added.

Amitabh Bachchan (77) and his son, actor Abhishek Bachchan (44), are undergoing treatment at the Nanavati Hospital in Mumbai after testing positive for COVID-19, which they revealed on Twitter on July 11.

Abhishek's wife, actor Aishwarya (46), and their eight-year-old daughter Aaradhya were also found to be COVID- 19 positive the next day but they are "self-quarantining at home".

A grand idol of the superstar graces the "temple", which was built in 2001. It also has a collection of outfits, shoes and spectacles that Bachchan has used in different films.

Gifted to the association by the actor himself over the years, all the items are worshipped everyday with no exception even during the coronavirus outbreak. A specially composed "Amitabh Chalisa" is recited by the fans along with "aarti" of the idol.

"However, we have not been allowing visitors in the temple since the lockdown began. The "yagna" is also being attended by a limited number of fans," Mr Patodia said.

The association celebrates August 2, the day Bachchan got a second lease of life after being grievously injured on the sets of his film "Coolie" 37 years back, in a big way and has grand plans for this year as well.

"We all consider August 2 as the second birthday of Bachchan sir. This year we have plans to celebrate the day in a grand manner following all social distancing norms. Those who will not be allowed inside the temple can see the celebrations on internet," he said.

Mr Patodia said he was touched when Bachchan sent him an SMS inquiring about their wellbeing, following cyclone Amphan that lashed the city.

"Bachchan sir and his family are aware of our love and respect. He, Abhishek Bachchan, Jaya-ji and Aishwarya-ji know us. He has also been asking us to be careful in the wake of the coronavirus outbreak," he said.