Senior Congress leaders in Kerala said they were of the view that Mallikarjun Kharge was better suited for the party president's position. 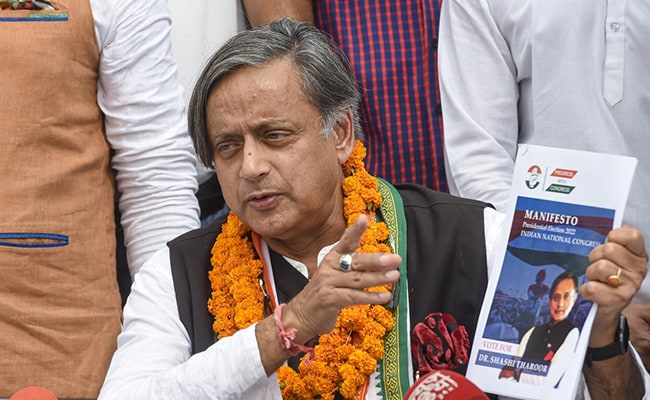 Shashi Tharoor has made an aggressive bid to the Congress's top post. (File)

Senior Congress leaders in Kerala said they were not against Shashi Tharoor, who has made an aggressive bid to the party's top post, but they were of the view that veteran leader Mallikarjun Kharge was better suited for the position.

Senior party leaders and MPs, K Sudhakaran and K Muraleedharan also said they were only expressing their personal views on whom they are supporting and everyone in the party was free to decide whom they want to vote for.

They were responding to statements made by Thiruvananthapuram MP Mr Tharoor in an interview with a TV channel where he said the party leaders in Kerala appeared to be against him in connection with the Congress presidential polls.

He also said in the interview that he has been asked by many to contest in the polls as they want a change in how the party is functioning presently.

Reacting to his statements, Mr Sudhakaran, also the Kerala Pradesh Congress Committee (KPCC) president, told the media in Kozhikode that he only expressed his personal view regarding whom he supports and he has not issued any directive on which candidate should be supported by KPCC delegates.

Mr Sudhakaran also said he was not aware that party leaders in Kerala were opposed to Mr Tharoor, as claimed by the Thiruvananthapuram MP.

Mr Muraleedharan, speaking to media, said there was no official or rebel candidate and all PCC delegates are free to vote for whomever they choose as it is a secret ballot.

He also said that Mr Sudhakaran only expressed his personal view.

Mr Muraleedharan further said that people like him in the party want someone who is closely connected to the general public and knows their minds and that Mr Kharge was such an individual "who has risen through the party ranks from the ground level by sheer hard work".

"We are not against Tharoor, but his connection with the common people is a bit less," he added.

"He (Tharoor) cannot be blamed for that. It is probably because of his diplomatic background. But that does not mean we are discounting or rejecting him. We need everyone -- those from ordinary or humble origins and those with diplomatic backgrounds. Party needs everyone," he further said.

Mr Muraleedharan also said that he was in agreement with Mr Tharoor's views that there should be a contest or election for the various party posts and such a change would be seen in Congress, especially in Kerala, in the future.

Regarding Mr Kharge's age, Mr Muraleedharan said that "if the mind and body can go together, then age is not an issue".

"People like me, in the present situation, believe that Kharge is the best person to lead the party with courage," he said.

The polling for the Congress presidential election is scheduled to be held on October 17. The counting of votes would be taken up on October 19 and the results are expected the same day. More than 9,000 Pradesh Congress Committee (PCC) delegates form the electorate.