Former Finance Minister P Chidambaram took a dig at the current dispensation alleging that three finance ministers are handling the economy at present -a de-facto, a de-jure and an invisible one. 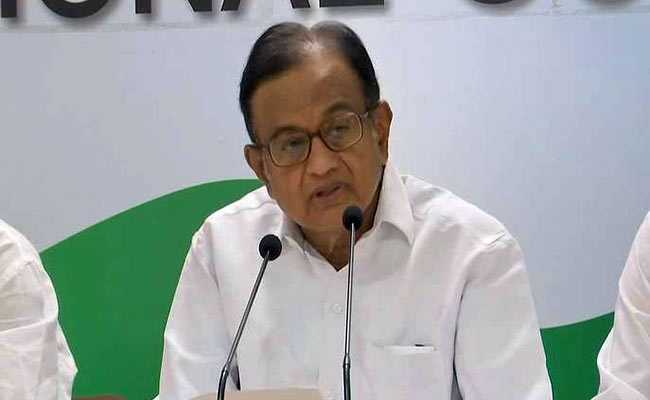 This is based on back series data on GDP by a committee of National Statistical Commission. (File)

The Congress-led UPA-1 and UPA-2 governments delivered the highest decadal growth since Independence, former Finance Minister P Chidambaram said today while taking a dig at the current dispensation alleging that three finance ministers are handling the economy at present -a de-facto, a de-jure and an invisible one.

The average growth rate under the UPA-1 government was 8.87 per cent, during which it also cloaked double digit growth rate of 10.08 per cent in 2006-07 and under the UPA-2 dispensation, it was 7.39 per cent, he said, citing data on gross domestic product (GDP) released by the Statistics Ministry.

Reacting to the claim, BJP spokesperson Sambit Patra said the data was not official and that it had not been accepted by the government yet.

"It seems whenever the Congress party is unable to succeed, it starts celebrating its failures. During the UPA regimes, Inflation was rising and they were unable to check current account deficit, whereas under the Narendra Modi government India has become one of the six largest economies in the world," he said.

"During Narendra Modi's regime, the country has transformed from the Fragile Five Economies to fabulous few destinations," Mr Patra said.

Senior Congress leader P Chidambaram said, "UPA 1 and UPA 2 delivered the highest decadal growth (8.13 per cent at factor cost) since Independence. It is also a matter of record that during this period 140 million people were lifted out of poverty."

The back series data on GDP prepared by the Committee on Real Sector Statistics, constituted by the National Statistical Commission, was released on the website of the Ministry of Statistics and Programme Implementation (MOSPI) on Friday.

Taking on the Narendra Modi-led government over the staggering growth rate, he said the current regime inherited an economy that was on the upswing. Unfortunately, after the first two years, the government stumbled and the momentum was lost.

The main reasons were demonetisation, flawed implementation of GST and tax terrorism, the Congress leader said.

He further said that "three finance ministers are handling the economy at present - a de-facto, a de-jure and an invisible one".

"Congress is a passionate advocate of high growth with equity and social justice. All three have suffered under the government of Narendra Modi," he said.