The BJP is demanding the arrest of Congress-affliated orator Nellai Kannan, who allegedly made derogatory remarks against PM Modi and Amit Shah at a Tirunelveli meet earlier this week. 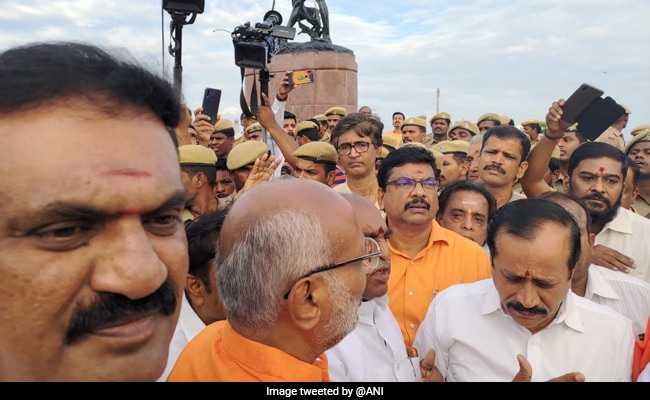 The BJP held a protest meet at Chennai's Marina Beach.

Several BJP leaders have been detained in Chennai for taking out a protest to demand the arrest of a Congress-affiliated orator accused of making a controversial speech against Prime Minister Narendra Modi and Union Home Minister Amit Shah earlier this week.

Although a case has been filed against the orator -- Nellai Kannan -- in connection with the "derogatory" speech in Tirunelveli on Sunday, he is yet to be arrested. The police had reached the orator's residence on Tuesday to take him into custody, but were told that he was suffering from "chest pain". Following this, they called an ambulance to take him to a hospital instead.

Nellai Kannan has been booked on several charges, including instigating violence between two communities and causing intentional insult with intent to provoke breach of peace, after a video of his purported speech at the Tirunelveli meet against the Citizenship Amendment Act was circulated widely on social media. He had allegedly expressed "shock" over why Muslims were yet to act against PM Modi and Amit Shah at the event, organised by the Social Democratic Party of India.

The case against Nellai Kannan was lodged after BJP's Nellai district leader Dhaya Shankar filed a police complaint stating that such remarks amounted to being an "open threat to PM Modi and Amit Shah's lives". He demanded that the Tamil orator also be charged under criminal incitement and abetment of murder, which were punishable crimes under the Indian Penal Code.

Police said they have received another complaint against Nellai Kannan from the ruling AIADMK.