The bridge, which is being constructed across a part of Pangong lake that falls within Chinese territory, connects both banks of the lake 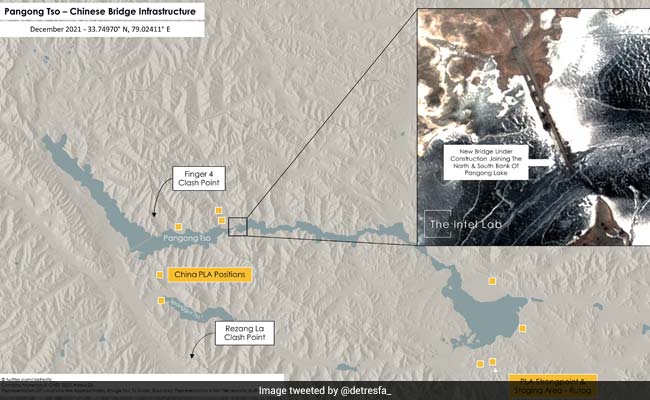 Satellite imagery accessed by geo-intelligence expert Damien Symon indicates that China may be constructing a bridge across Pangong lake in eastern Ladakh.

The bridge, which is being constructed across a part of the lake that falls within Chinese territory, connects both banks of the lake and gives China the ability of quickly move soldiers and heavy weaponry.

The tweet by Mr Symon shows the bridge almost complete across a narrow part of the lake.

Media reports of #PangongTso allege a new bridge is under construction connecting the north & south bank of the lake, in turn enhancing road connectivity for #China's troops in the area, GEOINT of the area identifies the location & progress of the alleged structure https://t.co/b9budT3DZZpic.twitter.com/IdBl5rkDhR

Last year, Indian soldiers had moved atop the key Kailash range on the south bank of Pangong lake, thereby gaining an early edge over Chinese forces in the area.

With the completion of this bridge, China will have multiple routes to induct additional soldiers into the contentious area which saw a face-off between soldiers of both sides, until Beijing and New Delhi decided to disengage from the area.

Since 2020, more than 50,000 troops from India and China have been deployed in eastern Ladakh from the Depsang plains to the north and to the Demchok area further south.

Army sources have also told NDTV that a new video from an official Chinese media handle on twitter, which shows a Chinese flag being unfurled in Galwan valley, does not violate the demilitarised zone between the two countries in the area.

1 Dead, 3 Injured After Being Hit By Speeding Ambulance In UP