Aishwarya Rai Bachchan was accompanied by her five-year-old daughter Aaradhya at Cannes. Pictures of the duo from the event are going viral on social media 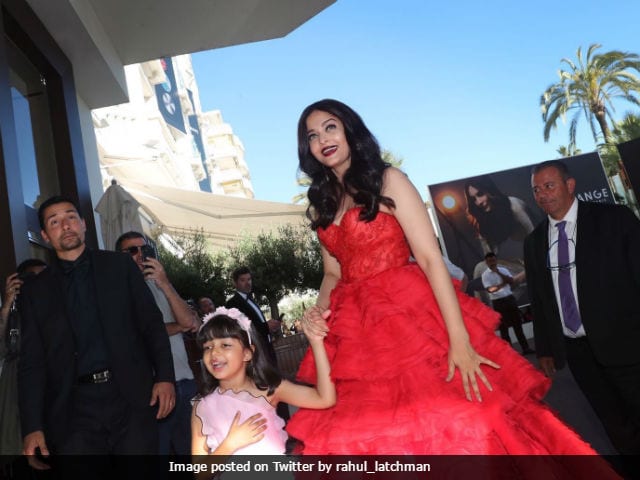 New Delhi: Aishwarya Rai Bachchan made her final appearance on the red carpet at the 70th Cannes Film Festival on Saturday night. The 43-year-old actress looked ravishing in a red gown by Ralph & Russo. She styled her look with studded earrings. This was Aishwarya's 16th year at Cannes, where she represented cosmetics giant, L'Oreal and the Guzaarish actress was accompanied by her five-year-old daughter Aaradhya. A few adorable videos and pictures of the duo from the event are going viral on social media and Aardhya looks at ease with all the paparazzi. In one picture, she is seen walking down the carpet with mommy Aishwarya in a pretty pink dress.

This picture of Aishwarya Rai Bachchan kissing her five-year-old is just too adorable.

DAY:2 with Diva #AishwaryaRaiBachchan @cannes_filmfestival @festivaldecannes The Adulation she's welcomed wt EVERY single time n that group of fans who die evrytime she smiles #DIVA to d A n yet so humble #Aishwarya

Precious moment from when #AishwaryaRaiBachchan spotted little Aaradhya at the balcony. #AishwaryaAtCannes#LifeAtCannespic.twitter.com/nIlNmgMzoV

Ahead of her red carpet appearance, Aishwarya Rai Bachchan was seen taking Aaradhya for a tour of Cannes.

Here are some pictures of Aishwarya Rai Bachchan's various looks at the Cannes Film Festival.

Sun, sand and our queen in Cannes! What more can we ask for #AishwaryaRaiBachchan#LifeAtCannes#CannesQueen#AishwaryaAtCannespic.twitter.com/yWDL1GdROH

When at Cannes, pose and pout #LifeAtCannes#AishwaryaAtCannes#CannesQueenpic.twitter.com/er7dGHvr9W

Aishwarya Rai Bachchan recently addressed the media through face time. Speaking about her daughter Aaradhya, the Jazbaa actress said: "She has had a very normal upbringing till now. It's not like we sit her down and show her our films. I can't say she is blissfully unaware, she is aware of what we do. She obviously sees our posters all over the city. She is aware of who we are," reports PTI.

Meanwhile, Sonam Kapoor is all set to walk the red carpet tonight.

Cannes Film Festival which began on May 17 will end on May 28.
Comments
aishwarya rai bachchancannes film festivalcannes 2017