Aishwarya Rai Bachchan has closed red carpet appearance at the 70th Cannes Film Festival with a bang. She wore a stunning red gown for the finale appearance 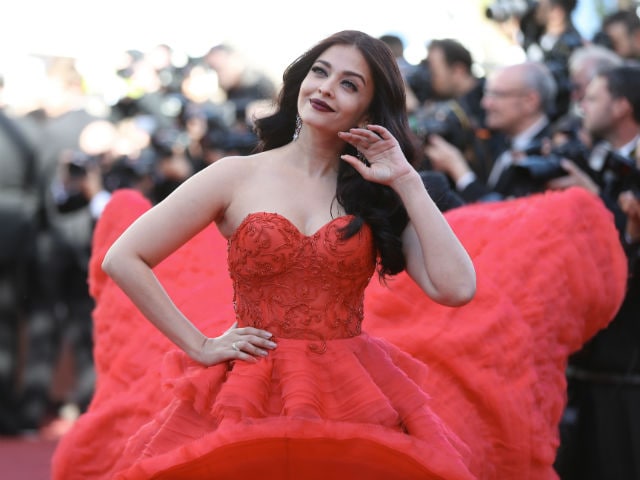 New Delhi: Aishwarya Rai Bachchan has closed red carpet appearance at the 70th Cannes Film Festival with a bang. She won hearts in a powder blue brocade ball gown dress on Day 3 and today she stole the show in a stunning red gown with a fitted corset-styled bodice by Ralph & Russo. She styled her look with studded earrings. This is Aishwarya's 16th year at the Cannes Film Festival, where she is representing cosmetics giant L'Oreal. She will be presenting her 2002 film Devdas today. Earlier in the day, Aishwarya picked a gorgeous black asymmetrical ensemble for one of the events near the beach side of the French Riviera. Here are pictures of Aishwarya Rai Bachchan's final look.

Red is totally her colour! #AishwaryaAtCannes#LifeAtCannespic.twitter.com/ghz7PqCMp4

Aishwarya wore an off-shoulder black number and complemented it with a bright orange lip shade and winged eyeliner. Here's her first look on Day 4.

We still can't get over her first of red carpet appearance. Like her dress, her hair and make-up were spot on.

Ahead of the red carpet, Aishwarya made two appearances - in a bottle green Yanina Couture gown with floral work on it and a cream coloured gown.

Sun, sand and our queen in Cannes! What more can we ask for #AishwaryaRaiBachchan#LifeAtCannes#CannesQueen#AishwaryaAtCannespic.twitter.com/yWDL1GdROH

When at Cannes, pose and pout #LifeAtCannes#AishwaryaAtCannes#CannesQueenpic.twitter.com/er7dGHvr9W

Promoted
Listen to the latest songs, only on JioSaavn.com
Aishwarya took over the red carpet from Deepika Padukone, who made her final appearance on Thursday. Meanwhile Sonam Kapoor has also checked into Cannes.