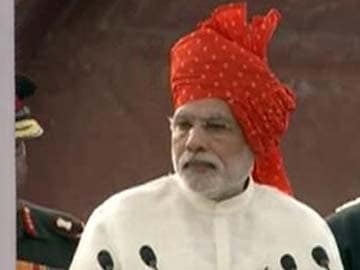 New Delhi: Prime Minister Narendra Modi today announced that the Planning Commission will be wrapped up, because it is no longer relevant. (Come, Make In India. Manufacture Here: PM's Call to Investors)

"The times have changed from when the Planning Commission was created," he said in his speech to the nation, delivered from the majestic ramparts of Delhi's Red Fort. (PM Modi's Independence Day Speech: Who Said What)

Mr Modi has never signalled high esteem for the Planning Commission, an institutional vestige of attempts, during the infancy of independence, to mimic the Soviet command economy. (PM on Rape Cases: Correct Sons, Don't Question Daughters)

Last year, as Gujarat Chief Minister, Mr Modi stunned members of the commission by turning up at a meeting with a video that accused them of saddling states with one-size-fits-all policies. The agency is resented by state governments because it allocates central funds to them. (PM Modi's Top 10 Quotes)

Alluding to that, Mr Modi talked today of the importance and value of "the growing strength of the federal structure."

Sources say he is considering a proposal to bifurcate the commission with eight experts being pooled into a think tank tasked to helping him with "Vision 2020" - the plan meant to enable Mr Modi deliver on the promises he made for economic growth and more in his campaign. (For PM's Speech, No Bullet-Proof Glass is a Break from Tradition)

The remaining staff of the commission could be assigned to implement the think tank's recommendations and be merged with the Department of Expenditure which resides within the Finance Ministry. (I Am an Outsider to Delhi, Stresses PM Modi in His Speech)

Since Mr Modi became the Prime Minister in May, there have been signals that he wants to clip the central agency's wings, or perhaps abandon it altogether. The Prime Minister is formally the head of the commission; he has left the post of executive head vacant, and he has taken away its authority to determine the central government's capital expenditure, passing that to the Finance Ministry. (PM Modi's Speech: Read the Highlights)

Promoted
Listen to the latest songs, only on JioSaavn.com
The Planning Commission's utilitarian value has been questioned by experts who point out that its tome-like five-year plans are always laboriously crafted but rarely adhered to.

Members of the BJP like Arun Shourie have questioned the relevance today of an agency created in 1950 to optimise scarce resources in a newly born nation.