"Repetition of 2015 and 2013 promises in the AAP's 2020 manifesto reflects that nothing happened in the last five years," BJP's Vijay Goel said 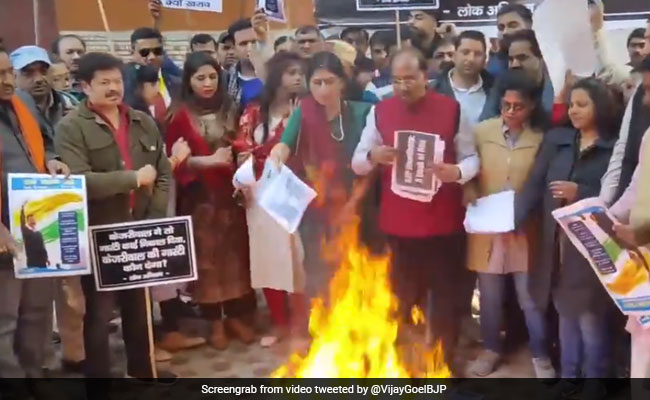 Terming the AAP's manifesto for the Delhi assembly election a "bundle of lies", BJP Rajya Sabha MPs Vijay Goel and Roopa Ganguly burnt copies of it at Jantar Mantar during a protest on Wednesday.

The manifesto was released by Delhi Chief Minister Arvind Kejriwal on Tuesday.

Mr Goel said the manifesto copies were burnt in protest against Mr Kejriwal for "misleading and deceiving" the people of Delhi.

"Repetition of 2015 and 2013 promises in the AAP's 2020 manifesto reflects that nothing happened in the last five years," he alleged.

Mr Kejriwal promised free water up to 20,000 litres for every household but in view of "poor quality", people are spending more money on water purifiers, Mr Goel said.

The Rajya Sabha MP said the BJP would win the assembly election with a huge margin. Ms Ganguly slammed the AAP government, claiming that Delhi's condition has become "deplorable" in the last five years.

The election in Delhi is on Saturday; results will be out on February 11.