The Pakistani side had unilaterally stopped the exchange after the abrogation of Article 370. 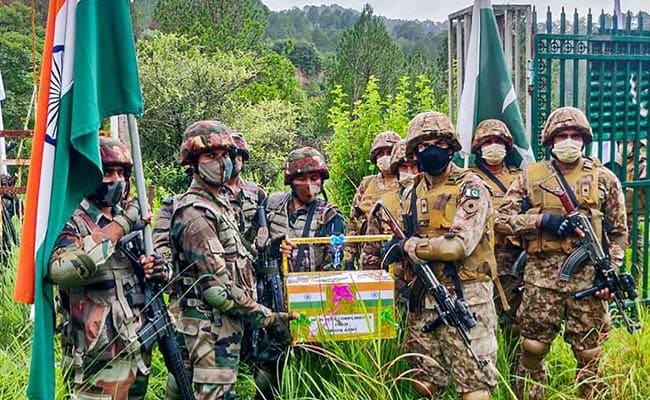 BSF and Pakistan Rangers exchanged sweets along the border on Eid-ul-Adha.

The Border Security Force (BSF) and Pakistan Rangers on Wednesday exchanged sweets at various points along the border on the occasion of Eid-ul-Adha, the first time since Pakistani side shunned the custom in 2019.

The Pakistani side had unilaterally stopped the exchange after the Narendra Modi government on August 5, 2019, abrogated provisions of Article 370 of the Constitution which gave special status to Jammu and Kashmir.

A BSF spokesperson said that "exchange of sweets took place between BSF and Pakistan Rangers on the occasion of Eid at JCP (joint check post) Attari" in Punjab's Amritsar district, which lies across the Wagah border front of Pakistan.

A similar exchange of sweets took place between the two forces along the Rajasthan front too, officials said.

This was the first time that sweets were exchanged between the two forces after the abrogation of Article 370 as the Pakistani side refused to continue with the custom, they said, adding after the developments of August 2019, the offer of exchanging sweets was made by the BSF but the Pakistani side did not reciprocate.

The BSF spokesperson, however, said this custom was suspended last year due to the outbreak of COVID-19.

The BSF guards the about 2,290 km India-Pakistan International Border (IB) that runs north to south from Jammu, Punjab, Rajasthan up to Gujarat on India''s western flank.

Exchange of sweets on the occasion of Eid-ul-Adha also took place along the border in Jammu.

"This is the first exchange of sweets between the two border guarding forces (BSF and Pakistan Rangers) after the Pulwama incident (in 2019). There was no cross-border shelling for long and farmers on both sides of the border have been able to carry out their farming activities peacefully," the Jammu frontier of the BSF said in a statement.

Forty CRPF personnel were killed when their bus in a long convoy of over 70 vehicles moving from Jammu to Srinagar was bombed on February 14, 2019, by a Jaish-e-Mohammed suicide bomber. Soon after, India carried out an aerial strike on a terrorist training camp of the terror group in Pakistan's Balakot.

Exchange of sweets is also undertaken by the two sides during festivals like Diwali and Eid, Republic Day, Independence Day, BSF Raising Day on December 1 and Pakistan's Independence Day on August 14.

India and Pakistan had on February 25 this year released a joint statement announcing a ceasefire along the Line of Control (LoC) in Jammu and Kashmir, following talks between their Directors General of Military Operations.

The two countries had earlier signed a ceasefire agreement in 2003 but it was repeatedly violated leading to deaths and injuries to civilians and troops on either side.

Meanwhile, a similar exchange of sweets continued as usual between the BSF and their Bangladesh counterpart BGB at multiple locations along the 4,096-km long IB on the eastern flank of the country.

"Both the border guarding forces share cordial and congenial relations. The exchange of sweets comes as a goodwill gesture and reflects true comradeship. It also helps in building and strengthening cordial relations," the BSF south Bengal frontier headquartered in Kolkata said in a statement.

It "has been a long-running tradition between the two forces to exchange sweets on the festive occasions", the BSF said.

The south Bengal frontier of the BSF guards about 903 km of the India-Bangladesh border along with the Border Guard Bangladesh (BGB).