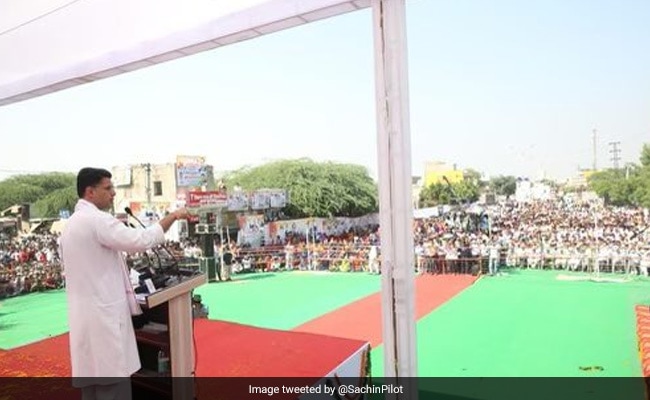 Sachin Pilot also unveiled a statue of Dr B R Ambedkar on the occasion.

Attacking the Centre over inflation, fuel price hike, unemployment and other issues, former Rajasthan deputy chief minister and Congress leader Sachin Pilot on Wednesday said the government has "cheated" the country in every sector.

Addressing a Dalit sammelan at Chaksu near Jaipur, Mr Pilot said that in the last seven years, "the BJP government ruined the economy, unemployment reached a historic peak, petrol, diesel and LPG cylinder have become expensive and inflation skyrocketed".

He also unveiled a statue of Dr BR Ambedkar on the occasion.

Mr Pilot alleged that the government rubbed salt into the wound by bringing the three agricultural laws. The laws have been facing protests all over the country for a year, the Congress leader said.

He said wherever possible, the Congress and its government in the state will give full opportunity to the Dalits to progress. Mr Pilot also expressed hope that a member of the community will be inducted as a cabinet minister in the state government in place of Master Bhanwar Lal Meghwal, who died last year while he was the social justice and empowerment minister.

The former deputy chief minister said Meghwal, who died due to brain hemorrhage, worked for Dalits and raised their voice.

"He was a cabinet minister in our government. The place is now vacant and I have full faith that the All India Congress Committee (AICC) and the (Rajasthan) government will soon offer cabinet rank to a member of the Dalit community," Mr Pilot said.

This was the first occasion when Mr Pilot, who revolted against the leadership of Chief Minister Ashok Gehlot last year, has said anything about the cabinet. The demand for a cabinet reshuffle in the state is being raised for the past several months.

Without naming anyone, the Congress leader warned those who do politics and seek votes in the name of Dr Bhimrao Ambedkar but have no attachment with him.

"Those who did not used to see Ambedkar, Sardar Patel are worshipping them for votes and power. They are doing it under your pressure. This should not be forgotten. These people are experts in hypocrisy, they have no attachment to Ambedkar, but when votes have to be taken and when it comes to rule and throne, then they can worship anyone. They are 'Behrupiye' (impressionist)," he said.

Mr Gehlot was busy in a meeting to review seasonal diseases.

Mr Pilot said these leaders were invited but they could not attend due to different reasons.

"I know our party and government is engaged in the work of development and welfare of Dalits," he said.

Recently, Mr Gehlot and Mr Pilot had travelled together in a helicopter along with Mr Maken and Mr Dotasra to address public meetings in Vallabhnagar (Udaipur) and Dhariawad (Pratapgarh) assembly constituencies where bypolls are being held on October 30. It was the second occasion when they travelled together after last year's Rajasthan political crisis.

"Whenever there is atrocity against women, Priyanka Gandhi reaches there," he said, adding she assured on Tuesday that 40 per cent of tickets will be given to women candidates in the 2022 Uttar Pradesh assembly polls.

Talking about the statue of Ambedkar, he said it is the tallest statue of the Dalit icon in Rajasthan which is made of 'astdhatu'.

He said the programme has been organised formally while taking along all and in a disciplined manner.