The 2021 TIME100 Next, released on Wednesday, is an expansion of TIME's flagship TIME100 franchise of the most influential people in the world and highlights 100 emerging leaders who are shaping the future. 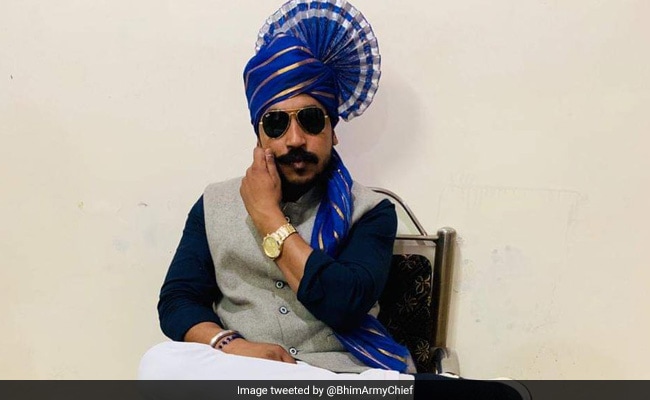 The 2021 TIME100 Next, released on Wednesday, is an expansion of TIME's flagship TIME100 franchise of the most influential people in the world and highlights 100 emerging leaders who are shaping the future.

"Everyone on this list is poised to make history. And in fact, many already have," Dan Macsai, the editorial director of the TIME100, said.

Other Indian-origin personalities on the list are Instacart founder and CEO Apoorva Mehta, doctor and Executive Director of nonprofit Get Us PPE Shikha Gupta and founder of nonprofit Upsolve Rohan Pavuluri.

Bhim Army chief Chandrashekhar Aazad is also on the list.

Mr Sunak's profile in the TIME feature says that a little over a year ago, the 40-year old was an "unknown junior minister in the British government" but after he was named to lead Britain's Treasury last year, he "quickly became the benevolent face of the government's response to the COVID-19 pandemic, approving large handouts for many citizens whose jobs were disrupted by the virus."

Mr Sunak has however also been criticised for advocating early relaxation of lockdown rules, the profile said.

"Nonetheless, Sunak remains the country's most popular politician, according to the pollster YouGov. And he's the oddsmakers' favourite to be Britain''s next Prime Minister," it added.

On Ms Mehta, 34, the TIME profile said that in the initial days of the COVID-19 pandemic, Instacart "faced a tidal wave of orders, as people with means opted en masse to pay the service's workers to buy groceries for them." Ms Mehta describes that period as a "wartime moment," it said.

However, later Instacart also "faced new criticism about the way it treated its workers, including labyrinthine sick-pay policies, frequent rule changes for shoppers and demanding performance metrics." Instacart continues its focus on expansion.

"The smartphone is the supermarket of the future. We are going to help co-create that," Ms Mehta said in the TIME article.

The TIME profile described Ms Gadde, 46, as "one of Twitter's most powerful executives" who was the one to convey the news to CEO Jack Dorsey that President Donald Trump's Twitter account had been suspended following the Capitol attack of January 6.

Mr Dorsey "has delegated to her Twitter's content-moderation decisions; she was the architect of the 2019 decision to ban all political advertising, and is responsible for the warning labels that Twitter applied to COVID-19 and election-interference misinformation in 2020.

"While Twitter is still home to much misinformation and harassment, Gadde's influence is slowly turning the company into one that sees free speech not as sacrosanct, but as just one human right among many that need to be weighed against one another," the TIME profile said.

Mr Aazad, 34, is the leader of the Bhim Army, which runs schools to help Dalits escape poverty through education and also "practices a distinct brand of assertiveness, sweeping into villages on loud motorbikes to protect victims of caste-based violence and organising provocative demonstrations against discrimination," the TIME profile on him says.

Mr Aazad and the Bhim army also "spearheaded a campaign for justice" in the case of the alleged gang-rape of a Dalit woman in Uttar Pradesh's Hathras.

TIME said Ms Gupta and her team stepped up to meet the growing demand for personal protective equipment for healthcare professionals at a time when there was a "leadership vacuum" from the White House.

"In a crisis, small acts can make a big impact. And in extraordinary times, ordinary people, driven by service, can do extraordinary things. The early days of the COVID-19 pandemic were some of the darkest in America's history. A leadership vacuum from the White House contributed to health care professionals across the country lacking the personal protective equipment they needed to stay safe and save lives," it said.

Ms Gupta, who "wasn't on the White House Task Force" or a governor or member of Congress, took action to solve the problem.

Ms Gupta leads the Get Us PPE organisation and along with a group of medical professionals and team members, the organisation helped distribute more than 6.5 million pieces of PPE to frontline workers.

Mr Pavuluri is the 25-year founder of the free online tool that helps users fill out bankruptcy forms on their own.

TIME said that as the COVID-19 pandemic brought varied economic hardships to Americans, filing for personal bankruptcy was seen as an effective way to eliminate debt but entailed high legal costs and complex paperwork.

Upsolve, which Mr Pavuluri founded in 2018, has till date helped American users relieve more than USD 300 million in debt, the TIME profile of him said.

"We've found a way to use technology to address a civil rights injustice at scale," Mr Pavuluri said in the TIME profile.