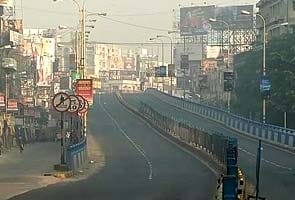 New Delhi: Central trade unions on Wednesday said that the first day of their nationwide strike in support of demands to contain inflation and employment generation had drawn "overwhelming response".

"All the central trade unions congratulate the working people of India for their overwhelming and magnificent response to the united call for two-day country wide strike, which commenced this morning," Mr Dasgupta said.

Asked about the violence in Noida during the strike, he said it was unfortunate.

The shutdown had turned violent in Noida as workers attacked factories that were open and set fire to vehicles and fire tenders that were trying to douse the flames.

Mr Dasgupta, a CPI-M MP, said the government should take note of the support extended by people to the strike.

He said the strike would continue on Thursday.

Centre of Indian Trade Unions (CITU) president A.K. Padmanabhan said they were expecting 10 crore people to participate in the strike and support for the shutdown had been to their expectations.

The unions have demanded concrete measures for containing inflation, steps for employment generation, universal social security, and making the minimum wage Rs 10,000 per month, along with daily allowance.