Hundreds of BJP workers and supporters marched towards Uttarkanya, the state government's branch secretariat, on Monday, protesting the TMC government's "misrule," in the state when police stopped them. 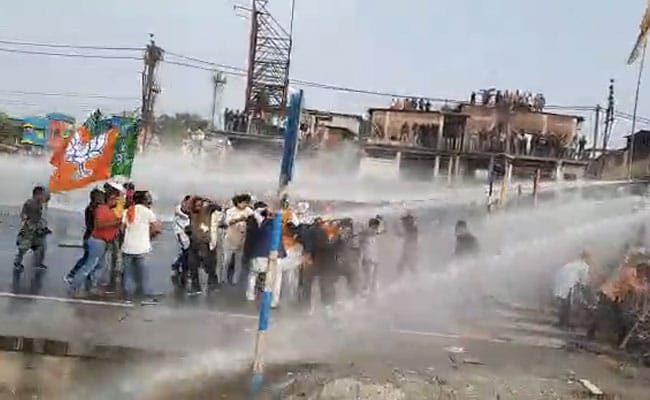 West Bengal Police on Wednesday registered FIRs against veteran BJP leaders Kailash Vijayvargiya, Tejasvi Surya, Dilip Ghosh, and several other party leaders on the allegation that they encouraged violence during the party's "Uttarkanya Abhijan" march in Siliguri on December 7.

The Police alleged that those charged encouraged the party workers to create violence, break law and order, clash with police and damage government properties.

Hundreds of BJP workers and supporters marched towards Uttarkanya, the state government's branch secretariat, on Monday, protesting the TMC government's "misrule," in the state when police stopped them.

Workers of the Bharatiya Janata Yuva Morcha (BJYM) and BJP and leaders fought a pitched battle with police after they were prevented from moving past the barricades at two points near the branch secretariat. The Police later issued a statement alleging that "serious acts of violence" were committed at the Siliguri protest and they used water cannons and fired several rounds of tear gas shells to disperse the crowd.

One BJP party worker, named Ulen Roy, succumbed to injuries caused by pellets fired from shotgun, according to a postmortem report. The West Bengal police claimed that the force did not use shotguns and alleged that "armed persons were brought and they fired from firearms."

BJP national general secretary and state in-charge Kailash Vijayvargiya alleged that a "nexus of police and Trinamool Congress (TMC) goons" was behind the death of party worker Ulen Roy.

"This is police's Nadirshahi (cruelty) and the anarchy of Mamata Banerjee government. There is a nexus between the police and TMC goons. Police were using tear gas and goons were hurling country bombs" he had said.