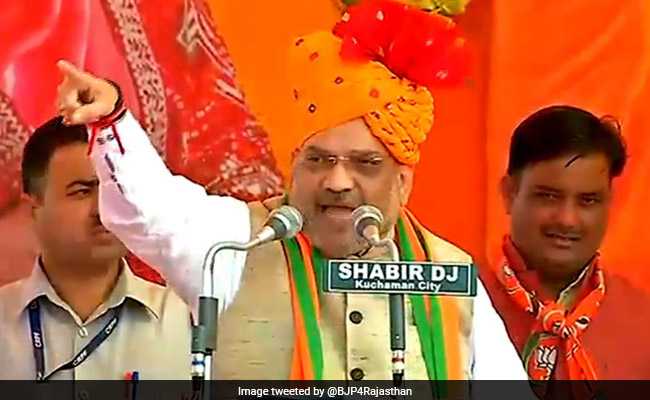 Shah addedAmit Shah said that the BJP would work towards getting each penny held by the fugitives.

BJP chief Amit Shah targeted Congress president Rahul Gandhi on Friday for raising the issue of bank loans and non-performing assets (NPA) in poll rallies, saying those were the results of the misdeeds of the previous Congress-led government.

Referring to a report carried by the Indian Express newspaper on its front page, Mr Shah alleged that the Nehru-Gandhi family's son-in-law had received commissions after a loan of thousands of crores of rupees was sanctioned to a big company.

"A company got a loan of thousands of crores and its commission reached the Nehru family's son-in-law within a few months, with which he bought 150 hectares of land in Bikaner at a throwaway price. I want to ask Rahul Gandhi if he can answer now," he said.

"They did not fly away abroad (during the Congress rule) as they had no fear of the Congress. They believed that they had a partnership. Those who are being guarded, why will they run away? After the PM Modi government came to power, they had a fear of being jailed," he said.

Mr Shah added that the BJP government would work towards getting each penny held by the fugitives back to the country.

The 200-member Rajasthan Assembly will go to the polls on December 7 and the results will be announced on December 11.