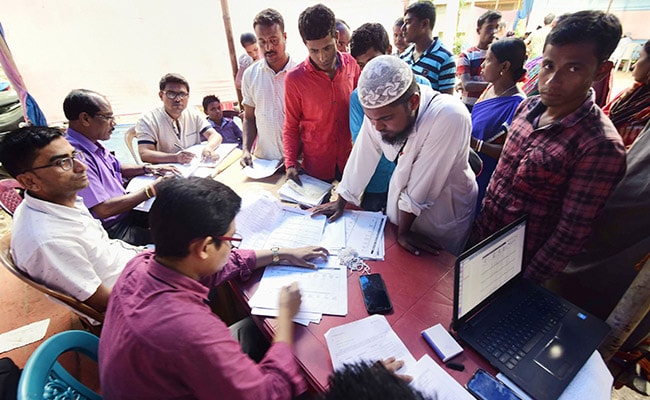 The people in Assam excluded from the draft National Register of Citizens (NRC) spent Rs 7,836 crore for the hearings and many have been so economically crippled that they will not be able to challenge their exclusion before the Foreigners' Tribunals, New Delhi-based Rights and Risks Analysis Group (RRAG) said on Tuesday.

Releasing report, "The Economic Cost of Draft NRC: Poor Made Extremely Poor", RRAG Director Suhas Chakma said that respondents during a survey carried out by RRAG said they have spent an average of Rs 19,065 per person for attending the hearing.

The survey was carried out in Baksa, Goalpara and Kamrup (Rural) districts of Assam between July 17 to July 20 this year and that the survey covered 62 respondents.

"The per capita income of Assam during 2018 was Rs 67,620 as per the Ministry of Finance. If Rs 19,065 has been spent for the NRC hearings by each excluded person, it implies that their per capita income had been effectively reduced to Rs 48,555 or about $700 which is at par with Central African Republic, the civil war ridden country with the lowest per capita income in the world, just above Somalia," Mr Chakma said.

The NRC has made 41,10,169 persons excluded, who constitute about 13 per cent of the state's 31 million population and many are overwhelmingly below the poverty line. Many had to mortgage agricultural lands, sell their cattle, livestock and agricultural products like betel nuts, and paddy or their only means of income like auto-rickshaws while many took loans to meet the expenses for the NRC hearings.

"As majority of those who shall be excluded from the final NRC to be published on August 31, 2019 have already been so economically crippled that they shall not able to meet the costs between Rs 100,000 to Rs 150,000 to challenge the exclusion before the Foreigners' Tribunals which are quasi-judicial bodies and require representation by lawyers. If they do not have the capacity to defend before the FTs, the question of challenging before the High Court and the Supreme Court does not arise," he said.

The report stated that hundreds of thousands of people are staring at extreme poverty, hunger and imprisonment in the detention centres as each person shall have to file appeal before the designated Foreigners' Tribunal constituted under the Foreigners' (Tribunals) Order, 1964 following publication of the NRC or be treated as foreigner and face the consequences.