General Bipin Rawat has spoken out against the massive nationwide protests against the Citizenship Act for the first time.

General Bipin Rawat is due to retire on December 31.

Army chief Bipin Rawat today criticized violence during protests over the citizenship law, saying "leaders are not those who lead masses in arson and violence". He was immediately called out for taking sides while still in a post that must be neutral and apolitical.

"Leadership is all about leading. When you move forward, everybody follows...But leaders are those who lead people in the right direction. Leaders are not those who lead people in inappropriate directions, as we are witnessing in a large number of university and college students, the way they are leading masses of crowds to carry out arson and violence in our cities and towns. This is not leadership," said the outgoing Army chief at an event in Delhi on Thursday.

General Rawat, who is due to retire on December 31, has spoken for the first time against the nationwide protests against the Citizenship Act. But he is not the first; before him, another top army officer made politically tinged remarks.

"'The citizenship Amendment Bill was passed despite reservations from a couple of northeastern states. It would not be hard to guess that some hard decisions on left-wing extremism may be on the anvil after this,'' he had said. 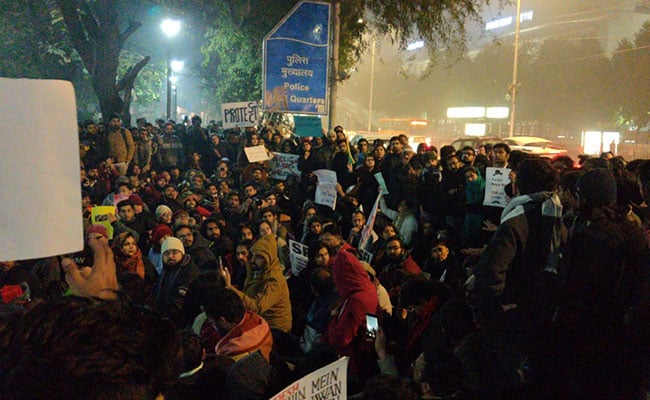 At least 20 people have died, mostly in Uttar Pradesh, in clashes between protesters and the police, who have also been caught firing at the crowd in many cases.

Yesterday, Prime Minister Narendra Modi had denounced the destruction of public property during the protests, saying rights went along with duty. "I want to ask people who resorted to violence in Uttar Pradesh to sit at home and ask themselves whether what they did is good or not. They destroyed buses and public property that belongs to the future generation," he said.

The Army Chief's comments were criticized by opposition parties like the Congress.

"Army Chief Bipin Rawat speaking against #CAAProtests is wholly against constitutional democracy. If Army Chief is allowed to speak on Political issues today, it also permits him to attempt an Army takeover tomorrow!!" - tweeted Brijesh Kalappa, a spokesperson of the Congress.

"Leadership is knowing the limits of one's office. It is about understanding the idea civilian supremacy and preserving the integrity of the institution that you head," tweeted Asaduddin Owaisi, Hyderabad MP and chief of the AIMIM.

Some who came out in General Rawat's support, however, said he was within his rights to speak as a citizen of the country. "His statement means one can protest but not be violent and destroy property. The leader of the mob should give correct direction to the protesters and tell them not to be violent," said Union Minister Ramdas Athawale, a BJP ally.

According to Article 21 of the Army Act, "no person subject to the Act shall publish in any form whatever or communicate directly or indirectly to the Press any matter in relation to a political question.''

Lieutenant General Manoj Mukund Naravane is set to become the next army chief.

General Rawat is widely tipped to be the first Chief of Defence Staff (CDS), a post that will function as a single point of contact for different branches of the armed forces and as the Principal Military Adviser to the Defence Minister on tri-service matters.

Reports suggest Northern Army Commander Ranbir Singh is also in the race. So far, the government has kept up the suspense even though the cabinet cleared the post earlier this week.