Vivek Agrawal said he went to the Damoh municipality office brandishing the cricket bat "to get people's work done". 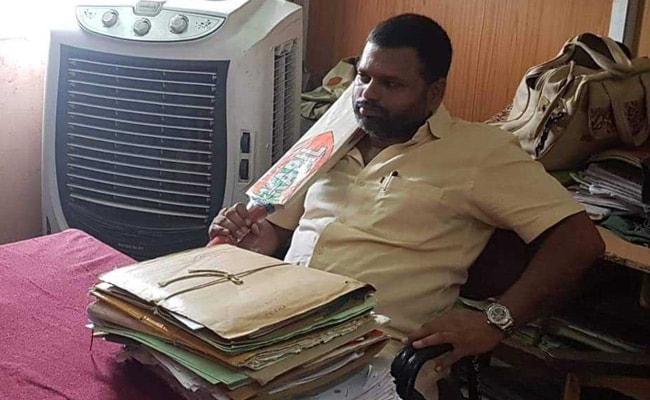 Vivek Agrawal said he was simply warning civic officials against being lazy.

Days after Indore legislator Akash Vijayvargiya was seen thrashing a civic body official with a cricket bat on national television, a youth leader of the party today landed at the Damoh municipality office wielding a similar weapon to "send across a message" against corruption.

"Since the Congress government came to power in Madhya Pradesh, no work is being done without money and musclepower," news agency PTI quoted Damoh Bharatiya Janta Yuva Morcha president Vivek Agrawal as saying. "I wanted to let them know that corruption will not be tolerated."

Mr Agrawal said he went to Damoh municipality office brandishing the cricket bat "to get people's work done", just as Akash Vijayvargiya had raised his bat against corruption in Indore. "I told the officials there that the bat will not be used if they do their work honestly and speedily. But they will be chased around with it if there is any sign of corruption or lethargy," he told PTI.

However, the BJP leader clarified that his action was strictly "symbolic" in nature, and he did not intend to hit anybody with it.

Akash Vijayvargiya, first-time BJP legislator and son of BJP veteran Kailash Vijayvargiya, was placed under arrest after footage of him and his supporters assaulting a civic body official in Indore was telecast across the country on Wednesday. The incident occurred after he entered into an argument with a municipal corporation team leading an anti-encroachment drive in Ganji Compound area.

"You will be responsible for what happens next you do not leave in five minutes," Akash Vijayvargiya was heard shouting at them. When the officials refused to yield, he began hitting one of them with the cricket bat in the presence of police personnel and mediapersons. He has been denied bail and sent to judicial custody.

Earlier today, another party leader -- Ram Sushil Patel -- was arrested for allegedly assaulting a government official in Satna. The victim has been hospitalised with serious injuries.