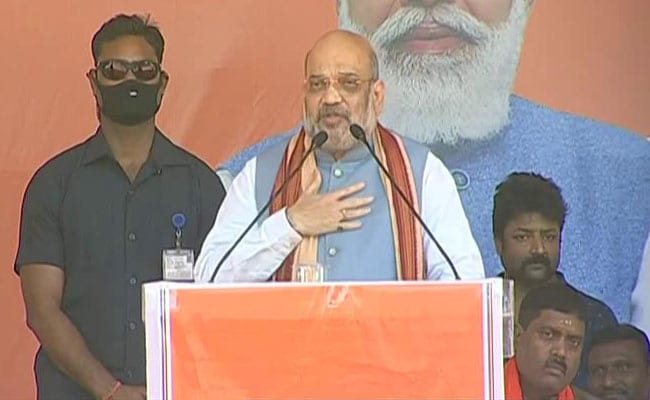 Union Home Minister Amit Shah today attacked the DMK-Congress combine over "corruption and dynasty" and said only the AIADMK-BJP alliance can "protect" those who believe in the culture of Tamil Nadu.

Seeking votes for NDA candidates with a promise of all round development of the state, Amit Shah said its top leaders, Prime Minister Narendra Modi and Tamil Nadu Chief Minister EK Palaniswami, had grown from humble beginnings while those in the DMK and Congress are from "dynasty."

"Only the AIADMK-BJP alliance can protect Tamil Nadu's fishermen, unemployed youth, women and all those having faith in Tamil Nadu's culture," he told reporters in Chennai.

Single phase polling to 234 Assembly seats is scheduled on April 6.

"Stalin sir's anger and BP (blood pressure) goes up whenever I make a mention of Udhayanidhi and he ends up saying something about someone," Mr Shah said.

Keeping up his attack of family and dynasty politics against the two, Mr Shah said Congress was "4G and DMK "3G", referring to the generation of leaders from the respective first families in politics.

While the leaders of NDA, PM Modi and EK Palaniswami, started from humble beginnings, "on the other side is the DMK and Congress."

The Maran family, Karunanidhi family and Gandhi family "are dynasty, family parties whereas BJP and AIADMK are parties that elevate grassroot workers to the posts of PM and CM," he added.

While PM Modi was worried about Tamil Nadu's farmers, unemployed youth and fishermen, MK Stalin was keen on making Udhayanidhi Chief Minister. "People of Tamil Nadu should decide to go with whom - with those who cares for them or those who want their son to become Chief Minister," he said.

Taking exception to some alleged controversial remarks made by Udhayanidhi against late BJP leaders Sushma Swaraj and Arun Jaitley, Mr Shah said "probably Stalin forgot" the Tamil culture of not making such statements against those who have died.

He charged the DMK leaders in the past with making such remarks against the "great son of Tamil Nadu," late chief minister and Congress stalwart K Kamaraj, credited with ushering in educational reforms in the state.

Taking on DMK leader A Raja, without naming him, Mr Shah said "breaking all traditions, they made such remarks against the demised mother of Chief Minister Palaniswami. DMK should be ashamed of all of these."

Taking note of a complaint from the ruling AIADMK, the Election Commission had on Thursday barred Raja from campaigning for 48 hours and also removed him from his party's list of star campaigners for the April 6 Assembly polls.

Observing that PM Modi and Mr Palaniswami "understood the pains of the common man," he recalled that is why the state government had twice waived farm loans, while the Centre was implementing an income support scheme of Rs 6,000 annually.

He also listed out the various other welfare initiatives for Tamil people, including grouping seven communities under Devendra Kula Vellalar, setting up a Defence corridor and highlighted PM Modi's "special love" for Tamil which he had exhibited by recalling from verses during his speeches in foreign countries.

On the bull taming sport Jallikattu, Mr Shah said the Modi government had earlier allowed its resumption following a ban and expressed fears that Congress and DMK may stop if they are voted to power.

"Only AIADMK, BJP and PMK can ensure the all round development of Tamil Nadu, not the corrupt DMK and Congress," he said.

The Home Minister lauded Chief Minister Palaniswami and his deputy O Panneerselvam for taking the state on the path of development and for the effective handling of the COVID-19 pandemic, saying Tamil Nadu has been at the 'forefront' of the fight against the contagion.

"Tamil Nadu's growth is possible only when we defeat the corrupt and dynastic DMK and Congress," he said.

The development initiatives launched by Modi across the country should come to Tamil Nadu to fulfill the dreams of the 'great' late Chief Miniters MG Ramachandran and J Jayalalithaa, both AIADMK stalwarts, had for Tamil Nadu, he added.

At the road show, Mr Shah travelled atop an open van with Khushbu Sundar and AIADMK candidates from nearby constituencies.

Elections to 234 Assembly seats in Tamil Nadu are scheduled on April and the counting of votes will be taken up on May 2.