Ajit Doval had met Mike Pompeo and James Mattis last week in New Delhi too, but this was his first meeting with his counterpart John Bolton, the new National Security Advisor to President Donald Trump. 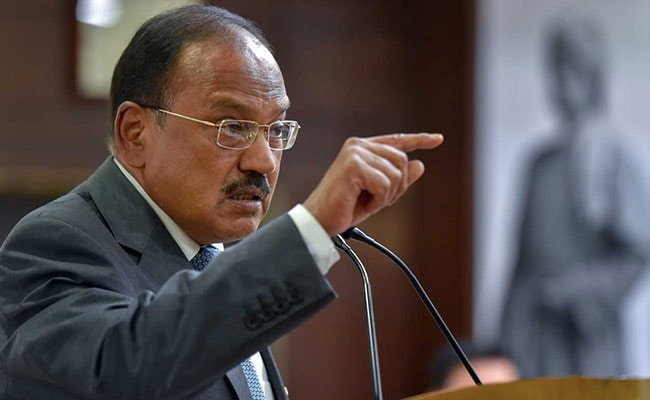 Mr Doval's meeting with the top three officials of the Trump administration came a week after the "highly successful" India-US 2+2 Dialogue between the defence and foreign ministers of the two countries.

Mr Doval had met Mike Pompeo and James Mattis last week in New Delhi too, but this was his first meeting with his counterpart John Bolton, the new National Security Advisor to President Donald Trump.

"During the three back-to-back meetings, Mr Doval had a good chance to review the entire bilateral relationship after the 2+2 talks. They build upon the discussion in New Delhi last week," informed sources told news agency PTI.

Describing it "as a very broad-based discussion", the sources said that Mr Doval and the three top Trump administration officials talked about the "future direction" of the strategic relationship and identified areas of co-operation.

Regional issues and global developments too figured in the talks, they said, without going into specifics.

The US Ambassador to India, Ken Juster in a tweet said that last week's 2+2 dialogue "set the course for even closer ties" between the two countries. He also said that the India-US partnership are on an upward trajectory.

"We've seen positive momentum regarding the US-India relationship these past few weeks with 2+2 dialogue and the progress continues with (Ajit) Doval's visit to the US," said the US India Strategic and Partnership Forum (USISPF).

India and the US signed the landmark Communications, Compatibility, Security Agreement (COMCASA) after the 2+2 talks External Affairs Minister Sushma Swaraj and Defence Minister Nirmala Sitharaman had with their counterparts Mike Pompeo and James Mattis on September 6.

The COMCASA will allow India to receive high-end military communications equipment from the US and will also help get real-time encrypted information from the US.

During the the 2+2 talks, India and the US also expressed commitment to work together and in concert with other partners toward advancing a free, open, and inclusive Indo-Pacific region.

Early this week, Principal Deputy Assistant Secretary of State Alice Wells told a Washington audience that the 2+2 significance was that it reaffirmed the strength of the India-US relationship.

"It reaffirmed the alignment of our interests and our values in promoting an open and free Indo-Pacific. It also underscored our interest in amplifying what it means to have a major defence partner in India, and really provided the building blocks, not for the next six months or a year, but for decades, of how we move forward carefully in building what is a very special relationship," she said.

Principal Deputy Assistant Secretary of Defence David F Helvey said the biggest thing that has come out of the 2+2 talks is that it puts the US-India relationship and the defence relationship in particular on a higher trajectory.

"We look forward to deepening the cooperation as two strategic partners as we work together to have a, realise a safe, secure and free Indo-Pacific region, or as Prime Minister Modi has said, a place where nations, small and large, can prosper free and fearless in our choices," he said.