"Finally, I feel free today...the order will liberate many women," said Shayara Bano, the first petitioner to go to the Supreme Court. 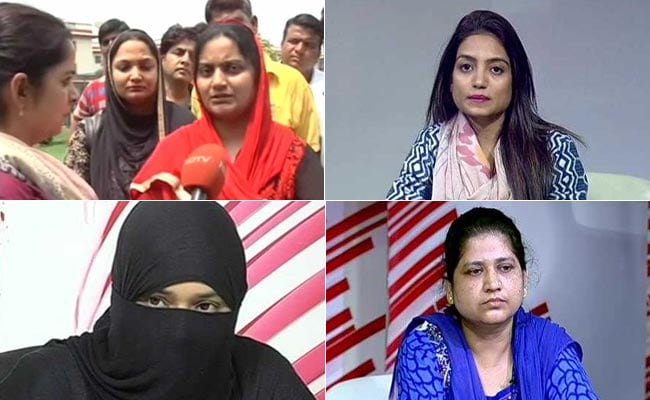 A five judges hearing said that triple talaq is unconstitutional.

Five women who challenged triple talaq or instant divorce by their husbands on the phone, by WhatsApp or speed post, rejoiced today as the Supreme Court banned the practice as unconstitutional. Their lawyers claim their marriages now stand restored as their divorces have been cancelled. Senior lawyer and Congress leader Salman Khurshid, who assisted the court, however, said that is not so; the judgment does not apply retrospectively or to individual cases.

"Finally, I feel free today...the order will liberate many women," said Shayara Bano, the first petitioner to go to the Supreme Court.

Shayara, 36, was divorced by her husband in 2015, through a letter with the word "talaq" written thrice. Her husband, a property dealer, also took away her two children. She alleged that her in-laws forced her to have six abortions and she had suffered much physical and mental stress.

Ishrat Jahan from West Bengal was stunned when her husband of 15 years, after a fight with her on the phone from Dubai, said "talaq, talaq, talaq" and disconnected.

"He came back to the village, remarried and took my two children to Dubai...For three years, he has not given me any money and my sister is supporting me," says Ishrat. For a year, she added, she had been living without electricity in her husband's home.

Atiya Sabri, married in 2012, was also divorced on a piece of paper, allegedly because she had two daughters and no son. She approached the Supreme Court earlier this year.

"I cannot tell you what I went through. When it happened to me, I realized that it is very wrong and decided to fight," Atiya told NDTV. "I am not against divorce but two people should be given time for reconciliation."

Atiya, who also survived a poisoning attempt, added: "I am happy my daughters won't have to face this when they grow up."

Promoted
Listen to the latest songs, only on JioSaavn.com
Gulshan Parveen, a petitioner from Uttar Pradesh, received a talaqnama or divorce notice on a Rs 10 stamp paper in 2015. "My husband felt like it one fine day and suddenly both my two-year-old son Ridan and I were homeless," said Parveen. She refused to accept the notice, after which her husband approached a family court.

For Aafreen Rehman, the life-altering news came by speed-post after she was allegedly beaten and driven out of her husband's home over dowry.