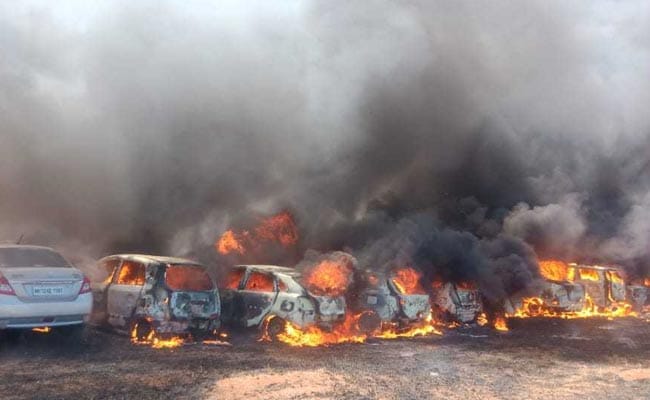 Aero India 2019: Huge plumes of black smoke could be seen in the sky near the Yelahanka air base

Nearly 300 vehicles were destroyed in a major fire that broke out this afternoon in the parking area of the Yelahanka Air Force station in Bengaluru, where the 12th edition of Aero India is underway. No casualties were reported.

Huge plumes of thick black smoke could be seen in the sky near the Yelahanka air base in north Bengaluru, where about a hundred aircraft are parked for the biennial Aero India 2019 event.

Senior police officer MN Reddi said the fire spread rapidly due to dry grass and strong winds. Hundreds of vehicles, including two-wheelers and cars, were seen parked in files in the open ground, surrounded by fire.

The Karnataka fire department tweeted a video of the blaze that rapidly spread in the parking area.

Vehicles got fire at parking area of #AiroIndia show at Yalahanka. Fire fighters On the spot.@DGP_FIRE@SunilagarwalI@KarnatakaVarthepic.twitter.com/5YAk2izsDx

The massive fire caused panic among locals and visitors on the fourth day of Aero India. The mega show was suspended briefly because of the fire.

Officials said the cause of the fire could be a lit cigarette that was disposed on the grass in the open field.

On Tuesday, a day before the opening of the Aero India show, two aircraft of the IAF''s aerobatic team Surya Kiran had crashed, after grazing each other mid-air, near here.  A pilot was killed and two others were injured in the accident. Aero India 2019: The fire in the parking area caused panic among the visitors.

Thousands of visitors are expected are attending the five-day biennial event which started on Wednesday and will conclude tomorrow.