Three-day Bengaluru Air Show Set To Take Off This Week

The public exhibition of India's aerospace and defence industries will be held on February 3-5. 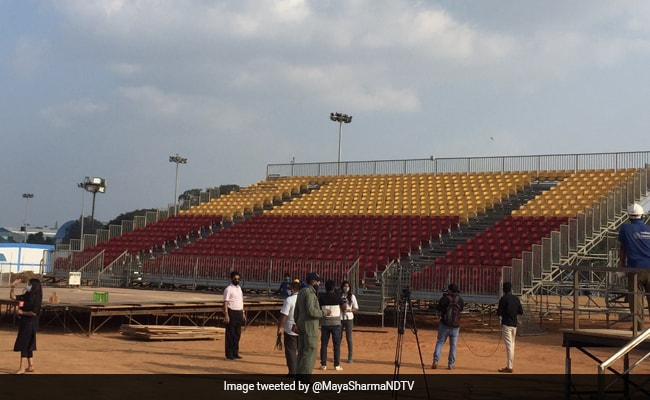 Preparations are on for the first Aero India edition in the times of Covid-19.

Forty-two aircraft of the Indian Air Force (IAF), Army, Navy, Hindustan Aeronautics (HAL), and the Coast Guard are set to sizzle across the skies of Bengaluru as the city readies for the biannual Aero India show this week. Unfortunately, though, fewer people will attend the event curtailed to three days and with only 3,000 allowed to watch the show at a time due to the Covid-19 restrictions in place.

The public exhibition of India's aerospace and defence industries will be hosted as usual by the Yelahanka Indian Air Force Station on the city's outskirts on February 3-5. The 13th edition of the global event is expected to see both business and general visitors.

The joint organisers of the show include the Ministry of Defence, the IAF, the Government of Karnataka, and HAL. This will be the first air show to be held since the Covid-19 pandemic struck India.

This year will also for the first time have a joint display of the Surya Kiran and Sarang teams. There will be 42 aircraft in the flying displays, with two displays every day: 9am to 12noon and 2pm to 5pm.

Those looking to attend the show must carry a Covid-negative certificate. "The air display - only 3,000 will be permitted. As far as exhibition and static display are concerned, this Aero India, I am sorry is not open for the public," Air Commodore Shailendra said.

The 2019 edition saw the tragic loss of a Surya Kiran pilot in an accident during rehearsals. Also, a massive fire in the car park destroyed around 300 vehicles. The organisers are, therefore, taking many precautions this time, including making the area a grass-free zone.

The flight arrival and departure schedule at Bengaluru's Kempegowda International Airport will be affected by the air show timings. The flying of drones, small aircraft, balloons, and other "sub conventional aerial platforms" has also been banned from today until February 8.

For years, there has been talk of moving Aero India out of Bengaluru to states like Goa and Uttar Pradesh. However, for now at least, the city's name remains attached to the air show.