Bollywood actor Kangana Ranaut's car was stopped in Punjab's Kiratpur Sahib on Friday by protesters demanding an apology for her statements against farmers who had been campaigning against the centre's controversial farm laws that were finally repealed this week.

An ardent supporter of the ruling BJP, Ms Ranaut had thrown her weight behind the laws, frequently calling the thousands of farmers camped out on the borders of Delhi for over a year, terrorists, Khalistanis and "anti-social elements".

On Friday, Ms Ranaut was passing through the area with her security detail when her car was stopped by protesters waving flags and shouting slogans.

"I have been surrounded by a mob here. They are abusing me and threatening to kill me," she claimed in a video posted on her Instagram Stories.

"This is mob lynching in public. What would happen if I don't have security with me? The situation here is unbelievable. Am I a politician? What is this behaviour?" Ms Ranaut said. 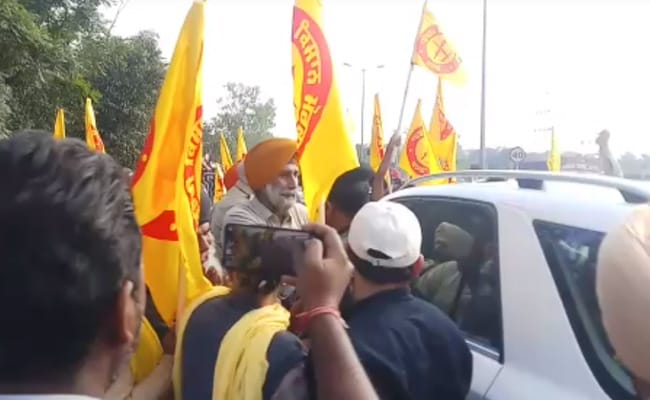 A truce was finally reached after the actor spoke to a few women protesters and she managed to leave the area.

Ms Ranaut told the farmers that the most virulent of her diatribes were aimed at protesters at Delhi's Shaheen Bagh who had been demonstrating last year against the centre's controversial citizenship law, criticised for discriminating against Muslims.

Her clarification, however, appeared to contradict her statements as recently as last week, when she referred to opponents of the farm laws as "Khalistani terrorists" in another Instagram Story.

"Khalistani terrorists may be arm twisting the government today. But let's not forget one woman. The only woman prime minister ne inn ko apni jooti ke niche crush kia tha (The only woman prime minister crushed them under her shoe) No matter how much suffering she caused to this nation she crushed them like mosquitoes at the cost of her own life Lekin desh ke tukde nahi hone diye (but didn't let the country disintegrate) even after decades of her death aaj bhi uske naam se kaampte hai yeh inko vaisa he guru chahiye (even today, they shiver at her name, they need a guru like her)," she said.

The comment triggered a furore and was seen by many as labelling the entire Sikh community - who made up a large part of the protesting farmers - as "Khalistani terrorists" and earned the actor a police case as well as summons from the Delhi assembly.